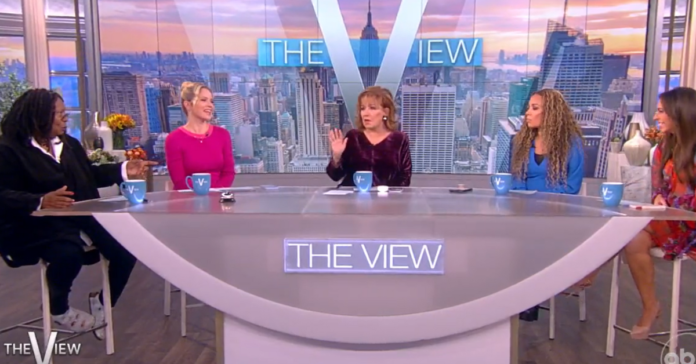 You can hear Joy cackle loudly in the video below. But it may have been gallows humor because later in the show Joy and co-host Sara Haines admitted the Dems are getting crushed in the midterm messaging battle.

Haines said: “Which party is getting the message out, I would actually say the Republicans are. And I tend to vote independent and left. And this is what’s frustrating to me now.

“My number one issue, which is a privileged stance to take in this election, is the denial of the election.

“The election deniers are my biggest fear right now because I think it stands at the heart of democracy but “I also recognize that three in five Americans live check-to-check.

“So I’m standing in a different place than a lot of them. And right now the issues that we’re seeing the most is inflation.

“As we said, that’s low-hanging fruit. Any party in control during a bad economy is going to be blamed but then crime and abortion are the other top two issues.

“The problem with the crime thing that’s really bothering me is the only thing the left is saying, even Kathy Hochul in New York, is “it’s a right-wing talking point, it’s nothing.”

“I don’t believe the left is light on crime.

“But what people say matters to them.

“You can’t tell them and dismiss it as invisible.

“If they say there’s crime, it even doesn’t matter what the statistics are. If they feel unsafe, you have to answer that.

“The left is not soft on crime.

“But the majority of people that are moderate and left are not soft on crime.

“Answer the question though! In these debates, don’t say “the right’s making it up.”

“They should be saying that while violent crime has risen, the states that have weakened gun laws have seen the gun crime surges.

“Those are red states and the Democrat-run major cities spend 38 percent more on policing per person than Republican-run states.

“But for some reason, you’re right, the Democrats can’t seem to get these words out that we have no trouble saying.”

“Saying it doesn’t exist is not an answer to the problem,” said Haines.

Sunny Hostin on The View: “I read a poll just yesterday that white Republican suburban women are now going to vote Republican. It’s almost like roaches voting for Raid.”

REMINDER: The left hates you.
pic.twitter.com/ua0i15tgCo