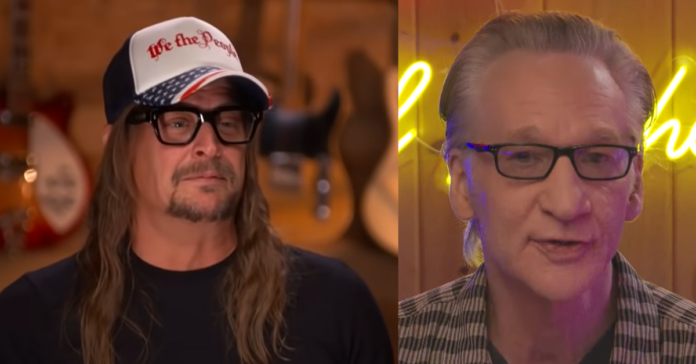 Kid Rock sat down for an interview Bill Maher for Maher’s “Club Random” and had an interesting conversation touching on many subjects including Trump and one night Maher and Kid Rock went out on the town.

“You probably think I am not the fan of your records that I am,” Maher told Rock. “That’s a bit of a surprise,” Rock said before reminding Maher of a night the two spent out on the town.

“We ended up going to this f–king thing to see Bill Clinton, he had dinner with Gregory Peck, went out to my limo — we smoked a f–king joint,” Rock said.

“I will never understand why you like this whiny little bitch, you’re such a real man, and he’s such a little bitch.”

Rock fired back “When you’re blasting him, that’s what I say, ‘I cant believe I’m watching this whiny little bitch.”

“He’s the greatest friend you can have, and he’s the guy you want in the front line if you have to fight.”

“Let’s just not instinctively hate somebody because of who they are and what team they’re on,” Maher added.

Maher said of Trump, “You can hate him  but you can’t hate everybody who likes him.”

Rock also said he wants to have a beer with Obama dispute not voting for him.

“I want to hang out with Obama and drink beer.

“I mean there’s not a cooler — all the presidents that I’ve, you know, been able to meet, from Jimmy Carter up.

“He can get down. I want to drink beer with him.”