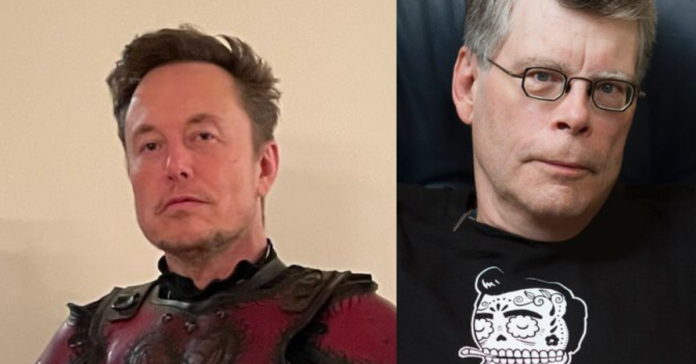 Elon Musk’s plan for twitter is to make people pay to have their coveted blue verification checkmarks. And our crybaby celebrities are furious. Stephen King threatened to leave the platform if forced to pay:

“$20 a month to keep my blue check? F*ck that, they should pay me. If that gets instituted, I’m gone like Enron.” When a Twitter user told King he could afford to pay $20 a month King said: “It ain’t the money, it’s the principle of the thing.”

Musk responded to King: “We need to pay the bills somehow! Twitter cannot entirely rely on advertisers. How about $8?” Musk then added: “I will explain the rational in longer form before this is implemented. It is the only way to defeat bots & trolls.”

Kathy Griffin is another celebrity whining about having to fork over $20 a month. She said of a reported plan by Musk to charge $20 a month to get verified on the platform:

$20 a month to keep my blue check? Fuck that, they should pay me. If that gets instituted, I’m gone like Enron.

“I don’t think it’s that blue check people are too cheap to pay 20 bucks a month, I just don’t wanna give any money to Elon musk and the Saudi family.

“I’ll stay until the midterms. In the meantime, I’m signing up for all other sites until we can settle on one. Look, I like you guys and all, but not $20.00 a month like. Inflation! I am enjoying tick-tock. I will look into blue sky and I think there’s two other ones people are talking about.

When asked why not just refuse to pay Elon Musk, Kathy said:

“Well, but then my acct and all blue checks will be cloned etc. Nonstop swarming. Having to disavow tweets attributed to me. No thanks. Plus musk is 🤮.”

Griffin was responding to a report from Verge claiming Musk has given his software engineers a deadline of one week to revamp how the platform verifies users with blue check marks.

The report also claimed Musk with charge $20 to get verified.

According to The Verge:

“The directive is to change Twitter Blue, the company’s optional, $4.99 a month subscription that unlocks additional features, into a more expensive subscription that also verifies users, according to people familiar with the matter and internal correspondence seen by The Verge.

“Twitter is currently planning to charge $19.99 for the new Twitter Blue subscription. Under the current plan, verified users would have 90 days to subscribe or lose their blue checkmark.

“Employees working on the project were told on Sunday that they need to meet a deadline of November 7th to launch the feature or they will be fired.

“Musk has been clear in the months leading up to his acquisition that he wanted to revamp how Twitter verifies accounts and handles bots.

“On Sunday, he tweeted: “The whole verification process is being revamped right now.”

We need to pay the bills somehow! Twitter cannot rely entirely on advertisers. How about $8?

I will explain the rationale in longer form before this is implemented. It is the only way to defeat the bots & trolls.

Laura Ingraham Sets ‘Dinosaur’ Liz Cheney Straight: “This idea that the old establishment dinosaur-like GOP is going to come lumbering back to life, it’s over”