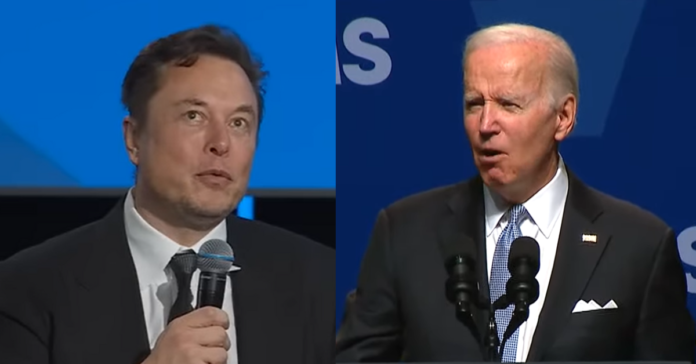 Right after Tesla CEO Elon Musk took over Twitter, President Joe Biden got a taste of his own medicine. The Dems have been leaning on social media companies over the flow of information but Biden never thought he would be the one on the other end of it.

Biden, or someone on his staff, said: “Let me give you the facts. In 2020, 55 corporations made $40 billion. And they paid zero in federal taxes. My Inflation Reduction Act puts an end to this.”

Let me give you the facts.

My Inflation Reduction Act puts an end to this.

Some regular corporate income tax credits and deductions are still allowed under the minimum tax, including credits for foreign taxes paid.

The carrying forward of prior-year losses to offset future income is also permitted, but only 80% can be applied to reducing taxable income.

Credits for research and development expenses are also allowed, with 75% of the value applied to reducing corporate minimum tax.

At the urging of Democratic Senator Kyrsten Sinema, lawmakers added a provision to preserve deductions on capital investments such as machinery, vehicles and buildings. The exception would allow companies to more quickly offset these expenses against tax bills.

Under another last-minute change to the legislation urged by Sinema, companies controlled by private equity firms are not subject to the corporate minimum tax if they make less than $1 billion of book income, even if that investment firm’s combined portfolio of companies exceeds the threshold.

Some private equity firms may be able to shift assets among companies in their portfolios so that each earns less than the $1 billion threshold to avoid the minimum tax.

Book income is calculated based on the income companies report to shareholders, and the new tax may give companies an incentive to lower the book income they report, law firm Baker Hostetler said in a recent note.

They pointed to a nonpartisan Congressional Research Service report showing evidence of how past efforts to levy taxes based on book income compelled corporate taxpayers to manage their earnings and adjust book income to reduce taxes.

Kathy Griffin Melts Down Over Elon Musk’s Plan To Charge Her To Use Twitter, Promises To Leave Platform: “I just don’t wanna give any money to Elon Musk, I’ll stay until the midterms”