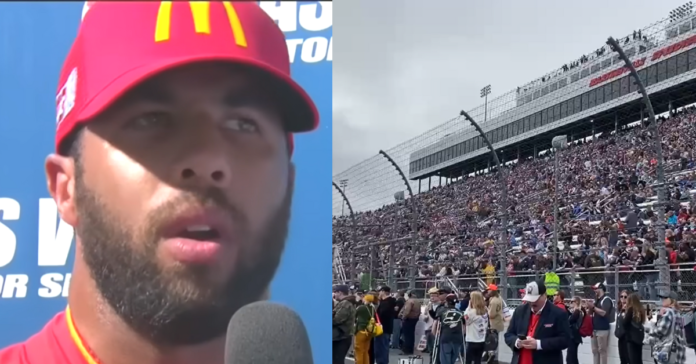 Bubba Wallace got a rude welcome back from NASCAR fans after serving a suspension for shoving fellow driver Kyle Larson. The fans at Martinsville let Bubba hear it and booed him loudly in his first race back.

Wallace said before the race: “There’s a lot of good things going into this weekend. I’m not coming back with a vengeance or anything like that. I’m just going to continue to do what we’ve been doing. And for the record, I have talked to Larson, and we had a great conversation this week.

“I think the best thing for us is we both understood where our frustrations were and moving forward and how we both can handle those situations better.

“They were understanding of the heat-of-the-moment type things, but they were very adamant about how we need to handle those five seconds later.

“That was the biggest thing.

“They still support me, and we’re here. Just have to go out and continue to build this team up.”

“Yeah, it was great to have that talk,” Larson said.

“I said the same thing.

“I came downstairs and told my wife that Bubba and I had a great conversation.

“I thought it went really well, and I think we’ve both moved on from it really fast.

“It was good to have a talk, good to just talk over the frustrations and mistakes on both of our parts.

“Move on and forget about it, and get back to racing.

“I feel like we’ve raced really well together in the past. Hopefully I don’t make any more mistakes and we can continue to race good,” he said.

Wallace was suspended for one race after he crashed Kyle Larson at Lap 94 of the South Point 400 and proceeded to shove Larson, both violations of Sections 4.3.A and 4.4.C & E of the NASCAR Member Code of Conduct laid out in the NASCAR Rule Book.

Rule 4.4.C lists “intentionally wrecking or spinning another vehicle, whether or not that vehicle is removed from Competition as a result” as one of five member actions that could result in a penalty.

NASCAR issued a statement that said:

The incident began at the exit of Turn 4 in the Cup Series’ Round of 8 opener in Nevada, where Larson slid high and forced Wallace into the wall.

Wallace, the victor of Stage 1, turned left into Larson’s right-rear quarter panel, sending the No. 5 Chevrolet spinning toward the outside wall and clipping Christopher Bell in the process.

Bell is still competing for a spot in the Championship 4 while Larson continues to chase an owners’ championship for Hendrick Motorsports. None of the three competitors were able to continue.

Ben Beshore, crew chief of the No. 18 Joe Gibbs Racing Toyota, will miss the next four races along with jackman Derrell Edwards and tire changer Michael Hicks after the left-front wheel detached from Busch’s car under caution at Las Vegas. The suspensions carry through the Busch Light Clash at the Coliseum.

In the Xfinity Series, the No. 51 Jeremy Clements Racing team was levied an L1-level penalty for violating Section 14.4.B.E, which pertains to the body.

The penalty report notes “Flange Fit Composite Body must be used as supplied from the manufacturer without modification.”

Crew chief Mark Setzer was fined $25,000 and suspended from this weekend’s race at Homestead-Miami Speedway while the team was docked 40 driver and owner points.

Chris Gayle, crew chief of the No. 54 Joe Gibbs Racing Toyota in the Xfinity Series, was also issued a $5,000 fine after the car was found with one loose lug nut following Saturday’s event.

Additionally, Andrew Abbott has been reinstated and is eligible to return to all NASCAR activity after completing NASCAR’s mandated anger management training.

Abbott was indefinitely suspended following pre-qualifying inspection for the NASCAR Camping World Truck Series race on Sept. 30 at Talladega for violating Sections 4.3 A & 4.A.E of the NASCAR Rule Book.

After his reinstatement, Abbott was added to the Camping World Truck Series’ entry list Tuesday as crew chief for Young’s Motorsports’ No. 20 Chevrolet for driver Stefan Parsons.

Bubba Wallace is NOT HAPPY with Kyle Larson.

Some pushes and shoves after they wreck. #NASCAR pic.twitter.com/aaAn0idrJp