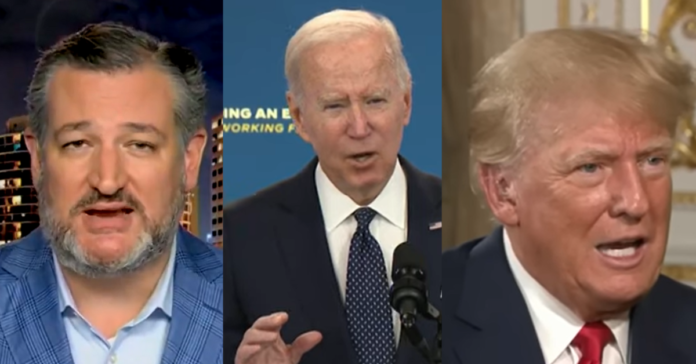 “This DOJ is trying to focus on Hunter Biden’s drug problem because they want to insulate Joe Biden from the real issue of public concern, which is public corruption.

Cruz called out the Department of Justice for sending a memo telling the FBI to work with local law enforcement to “target” parents who protested their school board’s policies.

The first responsibility of government is to keep us safe.

“I think we should focus at least initially on Mayorkas and Merrick Garland, because those are two cabinet officials who are profoundly abusing their responsibilities.

“And I think the American people need to know the facts”

Cruz has been traveling the country promoting various GOP candidates.

According to The Orlando Sentinel:

U.S. Sen. Ted Cruz drummed up support Friday night for two Central Florida congressional candidates ahead of what he predicted will be a “red tsunami” in the Sunshine State and across the nation on Election Day.

The Texas GOP senator stumped for Cory Mills and Scotty Moore at the Horsepower Ranch in Geneva in Florida’s redrawn 7th Congressional District with early votes being cast in the Nov. 8 election.

Cruz served up red meat to the conservative crowd, warning of dire consequences if Democrats keep control of Capitol Hill.

He took shoots at President Joe Biden, joking he “wanders off stage until the Easter Bunny leads him back.” He quipped, “Inflation is so high Hunter Biden can’t afford crack cocaine.”

Dems’ dripping condescension (“unique as tacos”) is a big part of why Hispanics are fleeing in droves to the GOP. https://t.co/P1ze01mi9b