Kari Lake Delivers Perfect Comeback To Liz Cheney: “My team tells me your commercial should add another 10 points to our lead” 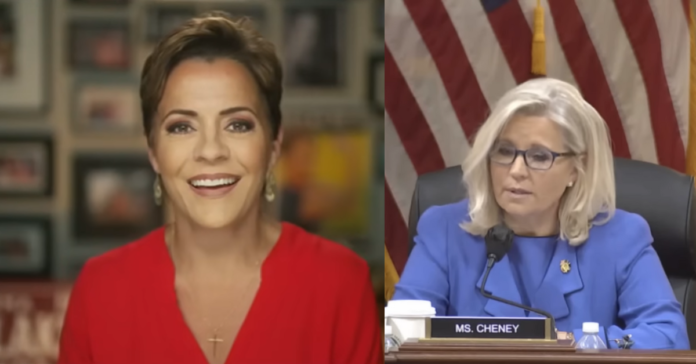 GOP candidate for governor in Arizona, Kari Lake, delivered the perfect answer to Wyoming Rep Liz Cheney for running an ad against Lake in Arizona. Cheney’s 30-second ad will air on television, online, and streaming platforms in Arizona.

In an ad, Cheney says “I don’t know that I have ever voted for a Democrat, but if I lived in Arizona, I absolutely would. You have a candidate for governor, Kari Lake, you have a candidate for secretary of state, Mark Finchem, both of whom have said that they will only honor the results of an election if they agree with it.

“And if you care about the survival of our Republic, we cannot give people power who will not honor elections. We must have elected officials who honor that responsibility,” Cheney added.

Lake said: “Dear Liz, Thank you for your generous in-kind contribution to my campaign.

“Your recent television ad urging Arizonans not to vote for me is doing just the opposite.

“In fact, my team tells me your commercial should add another 10 points to our lead! I guess that’s why they call the Cheney anti-endorsement the gift that keeps on giving.

“Thank you again for the huge boost to our campaign.

“Our campaign donations are skyrocketing and our website nearly crashed from traffic as people rushed to learn more about my plan to put Arizona First and join our historic movement.”

After her primary loss, Cheney, converted her House campaign committee to a political action committee named “The Great Task” — an organization that Cheney’s spokesperson said will seek to “mobilize a unified effort to oppose any Donald Trump campaign for president.”

.@KariLake: “I checked to see what the headlines were. One of them was ‘the most dangerous politician in the world.’ And they had my picture. And I’m just thinking, ‘I’m just a mama bear. Fed up with what’s happening and I want to protect my kids. Does that make me dangerous?” pic.twitter.com/xoDnBgCXOB

I had an amazing time last night at our Freedom & Revival Night featuring @seanfeucht, hosted by our Evangelicals For Kari coalition!

Thank you to everyone who came out to worship with us last night! I love you all! ❤️🇺🇸 pic.twitter.com/3lhHRhiH20