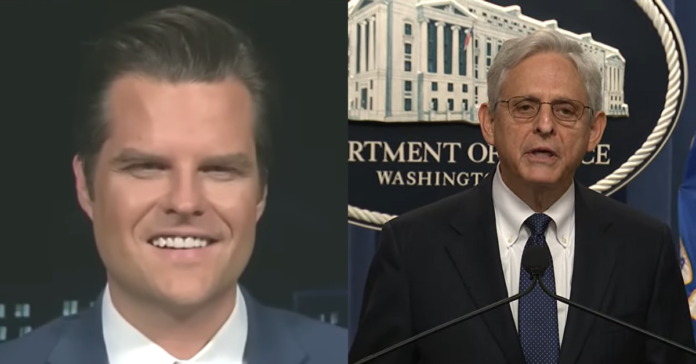 Florida Congressman Matt Gaetz got the best kind of news one can possibly get from the Department of Justice and will not face charges stemming from a long-running investigation into Gaetz.

The Justice Department was investigating if Gaetz had a sexual relationship with a 17-year-old girl and paid her to travel with him. The feds busted a local and quite corrupt Flordia politician who had ties to Gaetz and the liberal media have been waiting for Matt to get indicted ever since.

“Career prosecutors have recommended against charging Rep. Matt Gaetz (R-Fla.) in a long-running sex-trafficking investigation — telling Justice Department superiors that a conviction is unlikely in part because of credibility questions with the two central witnesses, according to people familiar with the matter.

“Senior department officials have not made a final decision on whether to charge Gaetz, but it is rare for such advice to be rejected, these people told The Washington Post, speaking on the condition of anonymity to discuss the deliberations.

“They added that it is always possible additional evidence emerges that could alter prosecutors’ understanding of the case.

“Nevertheless, it is unlikely that federal authorities will charge Gaetz with a crime in an investigation that started in late 2020 and focused on his alleged involvement with a 17-year-old girl several years earlier. Gaetz, 40, has repeatedly denied wrongdoing, saying he has never paid for sex,” the Post reported.

The DOJ’s probe into Gaetz stemmed from another investigation into one of the congressman’s associates, Joel Greenberg.

Greenberg, who was also a former tax collector in Seminole, Florida, pled guilty in May 2021 to several federal crimes, including trafficking a minor who was under 18 at the time.

“Greenberg also introduced the minor to other adult men, who engaged in commercial sex acts with the minor in the Middle District of Florida,” the Justice Department said.

In a letter obtained by The Daily Beast in the spring of 2021, that The Daily Beast said was written by Greenberg, he reportedly claimed that he and Gaetz paid for sex with multiple women, including a 17-year-old girl.

“From time to time, gas money or gifts, rent or partial tuition payments were made to several of these girls, including the individual who was not yet 18.

I did see the acts occur firsthand and Venmo transactions, Cash App, or other payments were made to these girls on behalf of the Congressman,” The Daily Beast said Greenberg wrote, referencing Gaetz.

Matt Gaetz has a lot of people to sue!