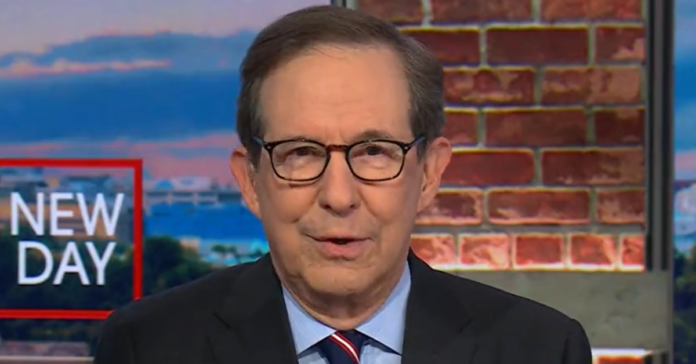 Chris Wallace was on CNN’s canceled morning show to promote his new interview show that will air on Sunday night on CNN and will stream on HBO Max.

But he got more than he bargained for when hosts Brianna Keilar and John Berman humiliated him with a clip from the interview causing Wallace to say: “I didn’t necessarily think that my colleagues here at CNN would play that as the one clip from a very good interview.”

According to TV Insider: “Who’s Talking to Chris Wallace? will debut on HBO Max on Friday, September 23, the streamer announced Tuesday, September 6, per The Hollywood Reporter. The most interesting clips from the first three episodes will be compiled into one special episode set to air on Sunday, September 25 on CNN.”

You can see the video below. Here is the transcript

BRIANNA KEILAR: You don’t just interview. Oh, all right. You – you sing along, and you better…

CHRIS WALLACE: I’m a little worried about Berman on this one.

BRIANNA KEILAR: You better believe we’re going to play this…

CHRIS WALLACE: Can I just quickly real quick, I was talking to Shania Twain, and I tell her that we were on a trip, a family trip to Yellowstone back in the late nineties. And we have a cassette on and it’s playing this song and we all sing along.

BRIANNA KEILAR: Here it is.

SHANIA TWAIN: Yes! You got the guitar part, too!

BRIANNA KEILAR: Did you ever think in that road trip that you would one day be singing that on TV with her?

CHRIS WALLACE: No. And I also didn’t necessarily think that my colleagues here at CNN would play that as the one clip from a very good interview. But I do want to say this, Berman, because I know you’re going to give me a lot of baloney about this. She says that at her concerts, when she does that song, men, women, old, young, they all sing. And honestly, John, have you ever, tell me that you have never felt like a woman?

JOHN BERMAN: You (laughs) there’s more to that answer than you have time for at this point. But let me let me.

CHRIS WALLACE: I’m sorry. Our time is up.

JOHN BERMAN: Let me, let me just say, you have the music inside you, and that’s what’s important.

CHRIS WALLACE: I do. I do have the music. The music flows through me.

Chris Wallace to @JohnBerman: “Honestly, tell me you have never felt like a woman.”

John: “There’s more to that answer than you have time for!” pic.twitter.com/HMNtYIzHiS

The much anticipated premiere of @hbomax‘s “Who’s Talking to Chris Wallace?” is finally here. He joins @NewDay with a preview: pic.twitter.com/0inkSO2O3F