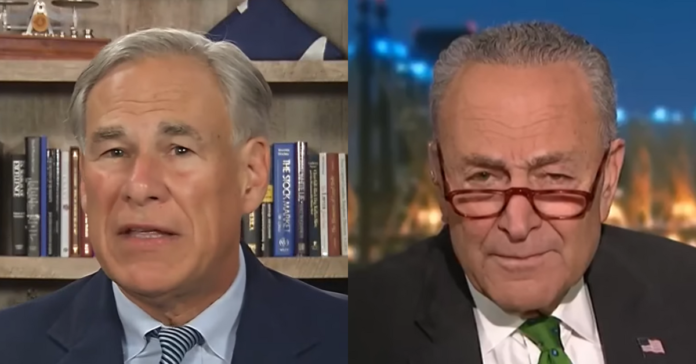 Patrick said: “Don’t threaten Texas. We’ve had now 400,000 people in the Del Rio sector in the last year. The population of that town is 36,000. That would be like us sending 80 million to New York.

“If we can put pressure on all these Democrat mayors around the country, maybe they’ll pick up the phone and call Joe Biden and say the border is not secure.

“We’re now on pace in his first term to be over 8 million people here illegally. Not counting the gotaways, just the ones we apprehend.

“That’s the entire population of New York City coming to America. We will be at 15% or more population in the next 5 to 10 years in this country of people who are here illegally.

“Look out your window, you might see a bus coming to you one day in the future.

“We’re desperate. We’ve got to make this a story,” he said.

Paterson said the move was “one of the most brilliant political strategies I’ve heard in a long time.”

“And there are a lot of things I don’t like about what he is doing.

“However, sometimes you have to tip your cap to your opponent.

“I don’t think Adams is being hurt in this process at all, but I think nationally, it’s an amazing way to focus people on the whole immigration process,” he said.

“Texas will continue busing migrants to Biden’s backyard until he steps up to do his job.”

Look, the louder the Dem Mayors complain the more they prove Abbott’s point.

“If we can put pressure on all these Democrat mayors around the country, maybe they’ll pick up the phone and call Joe Biden and say the border is not secure.”- @DanPatrick https://t.co/3VLEGubHhF #BorderCrisis