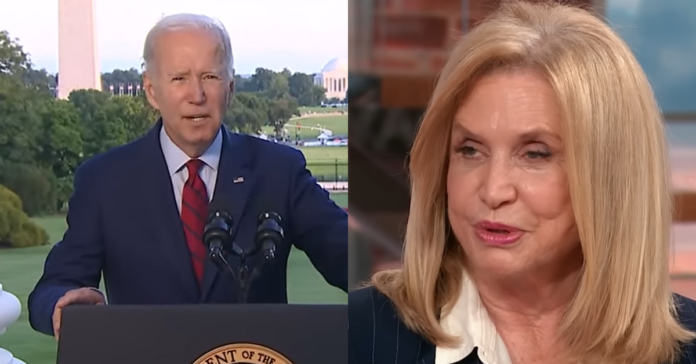 New York Democratic Congresswoman Carolyn Maloney let the cat out of the bag and told The New York Times editorial board, in what she thought was an off the record conversation, that President Joe Biden is not running for re-election in 2024.

Maloney is battling Jerry Nadler in the Dem primary after redistricting put the two longtime Congresspeople in the same district. The fight between the two has turned as ugly as you would expect.

The race is a virtual tie so Maloney went to the Times Editorial Board to make her case and made a flub that could come back to haunt her. And Joe Biden.

When asked about Biden’s 2024 plans, she said, “Off the record, he is not running aagin. The Times Board quickly reminded her that the interview was on the record.

To which Malony said coldly that Biden should not run. Wow.

Here is a transcript of the conversation:

Eleanor Randolph: Should there be an age limit for members of Congress?

Maloney: Members of Congress have a term limit.

It’s called an election every two years. We have a term limit. No one else has to run.

Eleanor Randolph: So that’s a no? Is that a no?

Maloney: Yeah, we have a term limit. We have to run for election. It’s difficult.

Maloney: Off the record, he’s not running again.

Maloney: On the record? No, he should not run again.

OOPS! Rep. Maloney Tells NY Times ‘Off the Record’ Biden is Not Running in 2024 — in On the Record Interviewhttps://t.co/KElk8HfV9o

Rep. Carolyn Maloney made the comments during an on-the-record interview, and both parties must agree something is “off the record” for it to be considered to be so. https://t.co/qZOSvM24b9

Schumer is the first member of the NY delegation to endorse either side in the race, and his entrance is not particularly expectedhttps://t.co/wFWMEBn9L2