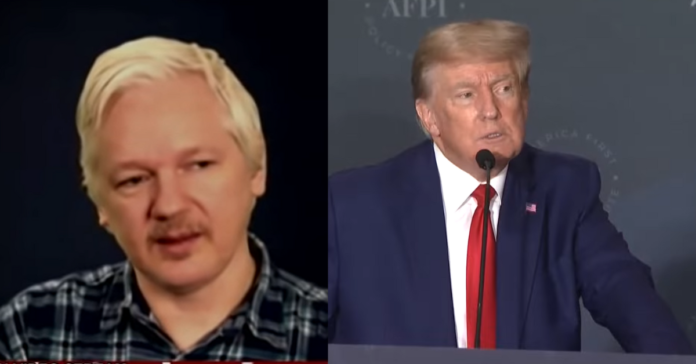 Matt Taibbi is a legendary independent journalist who was a darling of the left until he called bullshit on the Trump Russia story. He was branded a traitor, a Russian agent, and effectively banned from MSNBC and CNN.

He is shaming the DOJ’s use of the Espionage act and that using it against Trump will add his list to the most famous political martyrs in our history. Matt wrote:

If I were Trump, I absolutely would fundraise off being investigated under the Espionage Act. By pursuing him under this provision, the Justice Department just did Trump the mother of all favors, adding his name to a list of some of the most famous political martyrs in our history.

Anyone thrilled at the prospect of trying to prosecute a former president under the Espionage Act has blacked out the recent history of this law. How much does this Act suck, and shame us all? Let’s count the ways.

The Espionage Act represents the evolution of a series of laws whose purpose is/was to criminalize unauthorized use of sensitive information. I wrote this after the indictment of Assange:

These laws were written in a way that contradicted basic speech protections… There was a way to read the Espionage Act that criminalized what the Columbia Law Review back in 1973 (during the Pentagon Papers controversy) called the “mere retention” of classified material.

If you want a clear portrait of the shift in establishment thinking about this, look at the attitude of the New York Times toward its own role in the history of the Act.

In 1981, on the ten year anniversary of the government charging former Daniel Ellsberg with violation of the Espionage Act for taking the “Pentagon Papers” to the Times for publication, the paper’s former attorney in that case, Floyd Abrams, wrote an editorial celebrating the episode. He said it “stiffened the spines of all journalists.”

Matt continues shaming the DOJ’s use of the law:

Barack Obama was one of the most enthusiastic deployers of the Espionage Act, using it at least eight times to bring charges against people not for “espionage,” but for talking to the press.

The AP wrote how the Obama administration “obtained the records of 20 Associated Press office phone lines and reporters’ home and cell phones,” while they also:

Secretly dogged Fox News journalist James Rosen, getting his phone records, tracking his arrivals and departures at the State Department through his security-badge use, obtaining a search warrant to see his personal emails…

Establishment attitudes toward “whistleblowing” shifted with Trump’s election. Director Laura Poitras, won an Oscar in 2015 for her documentary about Snowden, CitizenFour.

Glenn Greenwald, the reporter with whom Snowden collaborated, won the Pulitzer Prize.

Yet when Trump got elected, a new type of “whistleblowing” became common. High-level leaks about issues like the Trump-Russia investigation, seemingly all coming from senior intelligence officials or congressional sources, were an almost weekly occurrence, and none were prosecuted.

One that didn’t go unpunished involved NSA contractor Reality Winner, sentenced to five years under, you guessed it, the Espionage Act.

What was different about her case? She wasn’t a former CIA director or a DNI, just an ordinary person. “It’s about low-hanging fruit,” Titus Nichols, Winner’s attorney, told me at the time.

Winner’s case came after a 2017 story in the Intercept entitled, “Top Secret NSA report details Russian hacking effort days before election.” They called it the “most detailed U.S. government account of Russian interference in the election that has yet come to light.”

The Espionage Act is an embarrassment that would make Marcos or Suharto squeamish, but it’s of course not completely impossible there’s an actual espionage offense in Trump’s case somewhere (just as obviously, no evidence of this has been produced).

Julius and Ethel Rosenberg were tried under the Act for giving bomb secrets to the Soviets, as Michael Beschloss and Michael Hayden just helpfully reminded us.

However, in modern times, the Espionage Act is more associated with talking to the Times, ABC, The Guardian and The Intercept than with actual spying. The defendants are more often conscience-stricken heroes like Hale than villains.

That’s the problem with this law. “Information relating to the national defense” can essentially be anything the government decides, and they can put you in jail a long time for “mishandling” it, which in Assange’s case included merely having it.

Trump or no Trump, if you think that’s okay, you’re an asshole. It’s totally un-American, which is why Robert Reich shouldn’t be surprised if Donald Trump acts proud of being investigated for it. This law is more infamous than he is, and everyone but a handful of blue checks can see it.

Hillary Clinton Gets Revenge On Bernie Sanders: “I know the kind of things that he says about women and to women”