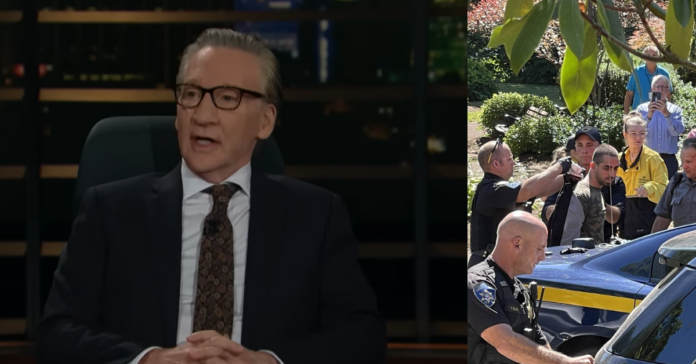 “Real Time” host Bill Maher reacted to the shocking attack on his good friend author Salman Rushdie in New York yesterday.  Rushdie’s agent, Andrew Wylie, said his client is on a ventilator and will likely lose an eye. “The nerves in his arm were severed and his liver was stabbed and damaged. The news is not good.”

The suspect was arrested and later identified as 24-year-old Hadi Matar.

“I’m guessing Hadi is not Amish,” Maher said. “He was giving a lecture about this for irony, prior about how the U.S. is a safe haven for exiled writers and other artists under threat of persecution.

“And making that speech itself is unthinkable in most Muslim countries.

“Salman Rushdie living in most Muslim countries without getting stabbed every day is unthinkable.

“So don’t come at me with ‘Islamophobic.’ Phobic means fear, right?

“Well, Sal had a good reason to be fearful.

“And when you say phobic, it’s just a way to shut off debate.

“You know, ‘transphobic,’ ‘islamophobic,’ we should have a debate about this.

“Sorry, but, you know, these things don’t go away.

“Islam is still a much more fundamentalist religion than any of the other religions in the world.

“And that means they take what’s in the holy book seriously.

“And that has been dangerous for a long time.

“It’s still dangerous. This was 1989 when he was first threatened.

“They say we have a long memory. We just got Ayman al-Zawahri.

“We were bragging about, ‘Oh, you can’t get away.’

“They have a long memory too.

“The idea of freedom of speech, it’s like- ‘What are you talking about? You insulted the prophet,” he said.

Adam Kinzinger Throws In Towel, Admits Trump Beat Him:  “Yeah, he won, in the short term, at least, there’s no use in pretending somehow I scored some major victory and saved the party”