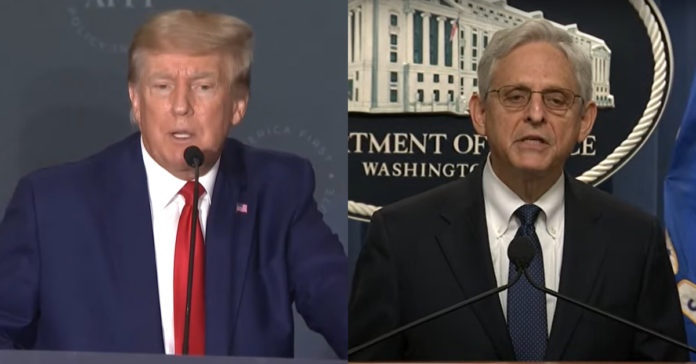 Former President Donald Trump called Attorney General Merrick Garland’s bluff and called for the immediate release of the search warrant and other documents tied to the FBI raid on his Florida club Mar-a-Lago.

Garland held an extraordinary presser yesterday where he defended the department and said he would move to unseal the search warrant. Trump has the documents and could release them so unless the judge decides against both parties we will see them soon. They may be heavily redacted however.

He said: “The search warrant was authorized by a federal court upon the required finding of probable cause. Copies of both the warrant and the FBI property receipt were provided on the day of the search to the former President’s counsel who was on site during the search.

“Just now, the Justice Department has filed a motion in the southern district of Florida to unseal a search warrant and property receipt relating to a court-approved search that the FBI conducted earlier this week.

“That search was a premises located in Florida belonging to the former president,” Garland said.

“Not only will I not oppose the release of documents related to the unamerican, unwarranted and unnecessary raid and break-in of my home in Palm Beach Florida, Mar a Lago.

“I am going a step further by encouraging the immediate release of those documents even though they have been drawn up by radical left Democrats and possible future political opponents, who have a strong and powerful vested interest in attacking me, much as they have done with the last 6 years.

“There has been a lot of commentary about the FBI this week questioning our work and motives.

“Much of it is from critics and pundits on the outside who don’t know what we know and don’t see what we see. What I know — and what I see — is an organization made up of men and women who are committed to doing their jobs professionally and by the book every day; this week is no exception.

“As always, the way we maintain the trust and confidence of the American people isn’t by joining in the public commentary. We do it through our work. By showing, when all the facts come out, we stuck to the process.

“We don’t cut corners. We don’t play favorites. We ask the tough questions — including of ourselves, making sure among other things that the investigative steps we take are measured and scrupulously consistent with our national security obligations and our role upholding the Constitution.

“Our focus must remain, as always, on our mission and on doing the right thing, in the right way, no matter how loud the noise gets.

“Let me also assure you that your safety and security are my primary concern right now. Security Division is working across the agency as we continue to stay vigilant and adjust our security posture accordingly.

I’m inspired by your extraordinary demonstrations of courage and sacrifice on behalf of the American people.

“And I remain proud of the rigor, objectivity, and fierce passion for the mission that you bring to the job. It’s an honor to serve alongside you,” he said.

“Are you out of your mind”: Eric Bolling Embarrasses John Bolton On Live TV: “You’re embarrassed for not knowing we were safer for four years”