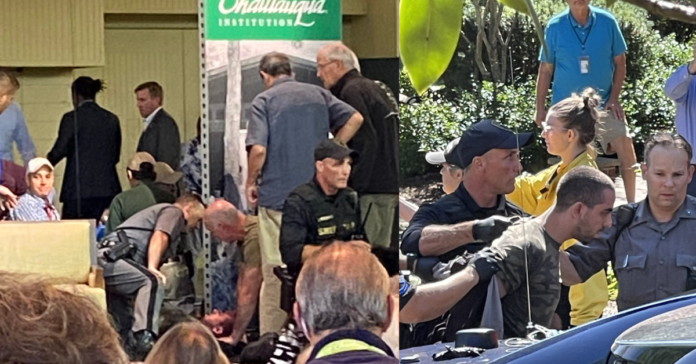 Salman Rushdie, the author whose writing led to death threats from Iran in the 1980s, was attacked and stabbed Friday as he was about to give a speech at the Chautauqua Institute in western New York.

He received aid on-site and was able to eventually walk off stage with assistance. Police arrested the man who attacked him.

According to the AP: “Rushdie’s book “The Satanic Verses” has been banned in Iran since 1988, as many Muslims consider it to be blasphemous. A year later, Iran’s late leader Ayatollah Ruhollah Khomeini issued a fatwa, or edict, calling for Rushdie’s death.

“A bounty of over $3 million has also been offered for anyone who kills Rushdie.”

Khomeini called for the death of Rushdie and his publishers, and also called for Muslims to point him out to those who could kill him if they could not themselves.

He was forced to go into hiding for a decade with police protection, and previously reported that he received a ‘sort of Valentines card’ from Iran each year letting him know the country has not forgotten the vow to kill him.

Hitoshi Igarashi, who translated The Satanic Verses into Japanese for Rushdie, was stabbed to death on the campus where he taught literature.

Ettore Capriolo, the Italian translator of the book, was knifed in his apartment in Milan.

The novel’s Norwegian publisher William Nygaard, was shot three times outside his home and left for dead in October 1993,  but survived the attack.

In Turkey, the book’s translator, Aziz Nesin, was the target of an arson attack on a hotel that killed 37.

Author Salman Rushdie was stabbed after taking stage at a Chautauqua Institute event. He received aid on-site and was able to eventually walk off stage with assistance.

This man has been detained by police: pic.twitter.com/nkQSMkJt24