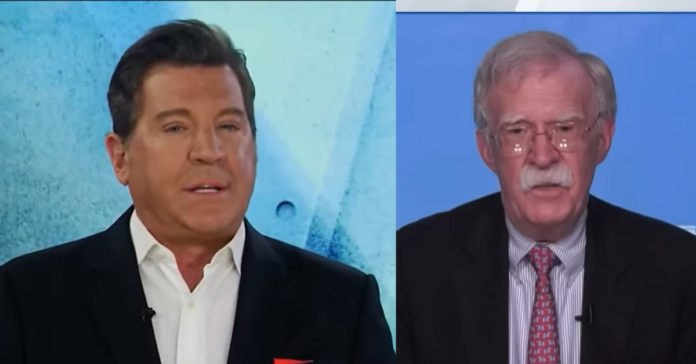 Bolton said: “I think we’re in a weaker position around the world. I think we have given up leadership in a wide variety of areas.”

A stunned Bolling said: “Ambassador, under Biden, we have China threatening us, we have Russia threatening us, you have a $300,000 bounty on your head. How in the world could you think that we’re safer now than we were under President Trump when he was willing to put missiles into Syrian airbases with Russians on the base? What’s going on here, sir?”

Bolton said, “He didn’t understand fundamentally much of anything about international affairs. His decisions were not based on a coherent philosophy or a coherent policy.”

Bolling said, “But we were safer.”

Bolton then mocked Trump for making a deal with the Taliban to get out of Afghanistan forgetting it was Bidne who botched the deal.

“Did that make us safer, Eric?” Bolton asked.

“You know what made us less safe?” Bolling said. “When Biden pulled us out of Afghanistan, 13 Americans died, and now–”

“That was Trump’s deal,” Bolton said.

“And now the Taliban tells us, ‘Back off, don’t kill Al Qaeda!’” Bolling fired back.

“Eric, you don’t know what you’re talking about.”

“I know you gotta go before you’re embarrassed even further,” Bolton said.

“You’re embarrassed for not knowing what Trump was going to do and hiding behind some false narrative that Trump wasn’t prepared for foreign policy when we were safer for four years, sir.”