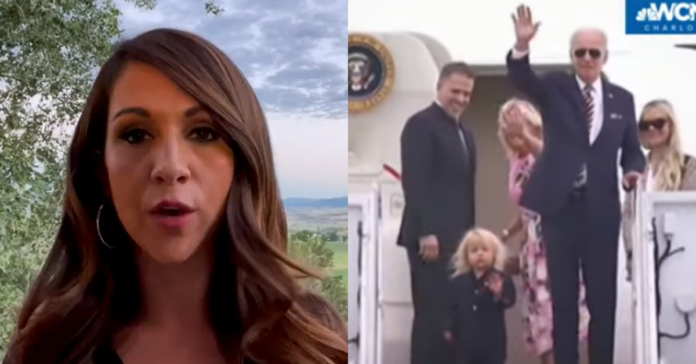 Boebert called for ‘a Select Committee to investigate’ the raid, presumably when the GOP takes back Congress after the midterms, before asking the question many Americans want answered: “When will Hunter Biden be raided?”

Eric Trump said the raid may have backfired posting on Truth Social: “DonaldJTrump.com is shattering all fundraising records and I’m told has raised more money in the past 24 hours than ever before in recent history! The American people are pissed!”

“Let’s be clear: This is a brazen weaponization of the FBI by Biden’s DOJ against his political opponent—while giving their political allies free passes.

“House Republicans will hold them accountable next year.”

“The Department of Justice has reached an intolerable state of weaponized politicization.

“When Republicans take back the House, we will conduct immediate oversight of this department, follow the facts, and leave no stone unturned.

“There are three kinds of people out there.

“There are the anti-Trump haters, for whom anything that happens to Trump – professor Laurence Tribe – it doesn’t matter, he’ll trash the Constitution to get Trump.

“Then there are the Trump lovers.

“Doesn’t matter how much evidence they might have, it’s not possible that Trump did anything wrong.

“They don’t want a different rule for Hillary Clinton and Sandy Berger on the one hand, and President Trump on the other hand.

“They want to see equal justice under the law,” he said.

When will Hunter Biden be raided?

“The decision by the Justice Department to conduct a full-scale morning raid on former President Trump’s Mar-a-Lago home does not seem justified, based on what we know as of now.

“If it is true that the basis of the raid was the former president’s alleged removal of classified material from the White House, that would constitute a double standard of justice.

“There were no raids, for example, on the homes of Hillary Clinton or former Clinton administration national security adviser Sandy Berger for comparable allegations of mishandling official records in the recent past.

“Previous violations of the Presidential Records Act typically have been punished by administrative fines, not criminal prosecution.

“The more appropriate action would have been for a grand jury to issue a subpoena for any boxes of material that were seized and for Trump’s private safe that was opened.

“Instead, the FBI apparently seized everything in view and will sort the documents and other material without a court deciding which ones are appropriately subject to Justice Department seizure,” he said.

“Whataboutism” is the right question to ask about the Trump raid. Watch the Dershow on Rumble and Youtube. Listen on Apple, Spotify and google.
Find out all about “whataboutism”. Leave a question or a comment in the chat. All platforms are up.https://t.co/uQpJ6iXtkK

Ex-Dem Rep Comes Clean: “Every American Should Be Extremely Concerned’ About Mar-a-Lago Raid