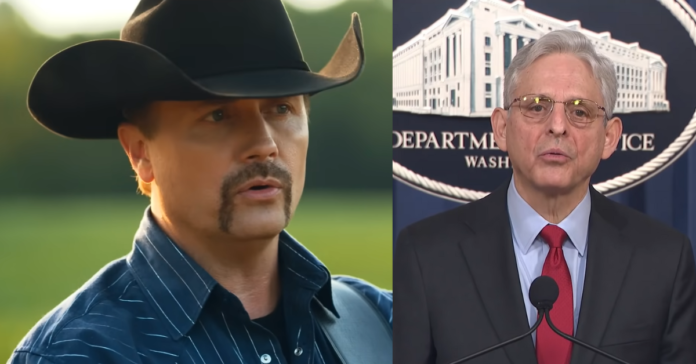 “A BIG thank you to Joe’s FBI for raiding Trump’s home! You guys just poured 81 million gallons of premium Patriot octane on an already blazing Freedom fire! See, you are good for something after all:) Much appreciated! See you in November!”

“When your polls are the lowest in American history, the only move left is to raid the personal home of your biggest rival. Can you smell the panic? Like a rainstorm blowing through the desert:)”

Rich has a new hit anti-woke song on the top of the charts that slams liberal “progress” and calls out President Joe Biden’s many failures.  And he did it while bypassing the music industry “machine.”

“Here I am with no record label, no publisher, no marketing deal,” Rich said. “It is bypassing this machine that they’ve built, going right around the machine, going right to the people and Truth and Rumble pushed it out there.

“And man, I’m really proud of what we did today.

A BIG thank you to Joe’s FBI for raiding Trump’s home! You guys just poured 81 million gallons of premium Patriot octane on an already blazing Freedom fire! See, you are good for something after all:) Much appreciated! See you in November!

“And I thought, you know what, I’m gonna reach out to Truth Social and reach out to Rumble because they still allow free speech over there.

“Why would I launch this song on the platforms that I’m railing against in the lyrics?

“I think without a doubt, it is a path forward.

“It means that if you bring the right content, and you have people like Truth and Rumble that will get that message to your core audience, you can beat the machine that’s been put in place to keep people like me shut down.” Rich said.

“I’m watching what I consider to be the dismantling of our country at a lot of different levels.

“And when you sit back and look at it, the vast majority of it’s being perpetuated on us under the banner of ‘progress.’ Like in the name of progress we’re going to send gasoline through the roof so you have to buy an electric car.

Rich released his new song, “Progress,” Friday on Truth Social and Rumble. Within hours, the song went to No. 1 on the Apple iTunes song chart beating out new releases from superstars Billie Eilish and Lizzo, and Kate Bush.

“Felt good to beat the machine today:) Thanks to all of you for the massive support! We are making good #Progress #NumberOne #Worldwide,” tweeted Rich.

The song’s lyrics include:

“They say building back better will make America great.

“If that’s the wave of the future, all I’ve got to say is, stick your progress where the sun don’t shine.

“Keep your big mess away from me and mine.

Alan Dershowitz Accuses Dems of Scheming to Stop Trump From Running: “Americans don’t want a different rule for Hillary Clinton and Sandy Berger on the one hand, and President Trump on the other hand”

Beto O’Rourke Snaps At Heckler: “It may be funny to you, motherf*cker, but it’s not funny to me”