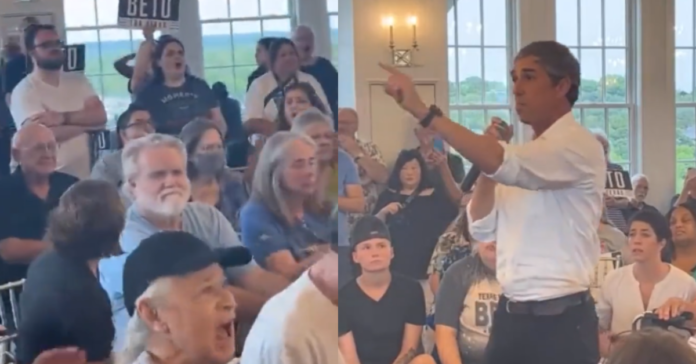 Dem candidate for governor of Texas, Beto O’Rourke, snapped and cursed out a heckler yesterday. A few hundred people were in the Kaufmann Leadership Academy’s gymnasium to hear the Democratic gubernatorial candidate speak.

There were more than a few protesters too. Two attendees had signs saying, “Boo Beto. Get out of Texas. We don’t want you here” and “Beto the [expletive] from El Paso”

Beto said: “It’s hard to believe that in a little under three months we’re going to decide the outcome of the most important election in the history of the state of Texas.

“Thanks to you and everyone that’s here we are going to win.

“I know we’re going to win because we’re fighting for every woman in Texas to make her own decision when it comes to her health care.

“Because we can get behind every public school educator and make sure we’ve got their backs as they go into this school year and every school year hereafter.

“That fact that we’re leaving $10 billion of our federal income taxes in D.C. and refusing to bring that money back to Texas.

“To stand up for our closed rural hospitals, connect more people in need of mental health services with the care they need in a state whose largest provider of mental health care service is the county jail system is tragic.

“Doing so will lower our property tax bills.

“We are paying for the uncompensated care in our county hospitals today because of the uninsured people who don’t qualify for Medicaid under our state’s current system.

“Those people don’t get preventative care and don’t go to doctors until they just have to but their bills don’t go away.

“They just get passed along in the form of higher property taxes, higher insurance premiums, deductible and co-pays.

“I don’t know that he wants any of these bad things to happen to us and our fellow Texans. But I do know that he is either unable or unwilling to make the changes necessary to fix things.”

At one point he was talking about gun control and got heckled. Beto snapped and said:

“It may be funny to you, motherf*cker, but it’s not funny to me.”

“It may be funny to you motherf—er, but it’s not funny to me”: Texas gubernatorial candidate Beto O’Rourke snapped at a man during a town hall on Wednesday who started laughing as O’Rourke discussed the gun used in the deadly Uvalde mass shooting. pic.twitter.com/sHCXh2mIpW

Whole Foods Founder Warns USA That Socialists Are Taking Over: "They're marching through the institutions”