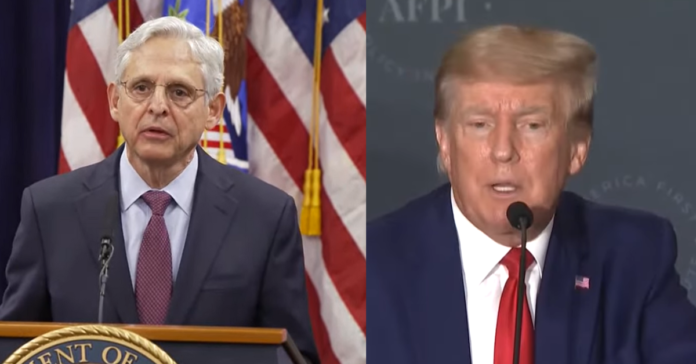 The Justice Department said Attorney General Merrick Garland will make a statement Thursday afternoon in the wake of the FBI’s raid of former President Donald Trump’s Mar-a-Lago home. People from both sides of the aisle want answers and it looks like we may finally be getting some.

The DOJ’s announcement did not say Garland would address the Trump raid and they did not say what Garland wanted to tell the American people only saying “Attorney General Merrick B. Garland will make a statement today.”

Former New York Governor Andrew Cuomo said: “DOJ must immediately explain the reason for its raid & it must be more than a search for inconsequential archives or it will be viewed as a political tactic and undermine any future credible investigation & legitimacy of January 6 investigations.”

Former Dem presidential candidate Andrew Yang said: “I’m no Trump fan. I want him as far away from the White House as possible. But a fundamental part of his appeal has been that it’s him against a corrupt government establishment.

“This raid strengthens that case for millions of Americans who will see this as unjust persecution.

“It seems like this was authorized by a local judge and a particular FBI office without buy-in or notification of higher levels of government.

“But literally no one will believe that or make a distinction. It’s probably bureaucratic but it seems political.

“If they raided his home just to find classified documents he took from The White House,” one legal expert noted, “he will be re-elected president in 2024, hands down. It will prove to be the greatest law enforcement mistake in history.”

The DOJ will also have to answer to the judge who signed the warrant. Federal Magistrate Judge Bruce Reinhart ordered the Department of Justice to “file a Response to the Motion to Unseal” the Mar-a-Lago search warrant no later than August 15. The judge was responding to a motion from Judicial Warch.

Judicial Watch President Tom Fitton said: “The Biden administration’s raid on President Trump’s home is an outrageous, reckless and unprecedented abuse of power. And the American people have an urgent right to know how it happened and who is responsible.”

Fitton’s organization issued a statement that said: “Judicial Watch announced today that it has filed a motion asking the U.S. District Court for the Southern District of Florida to unseal as soon as possible the search warrant materials used by the FBI to raid President Trump’s Mar-a-Lago home in Florida (U.S. v. Sealed Search Warrant (Case No. 9:22-mj-08332)).

“According to media reports, the warrant relates to an alleged dispute over the Presidential Records Act. In its motion Judicial Watch states:

“Judicial Watch is investigating the potential politicization of the Federal Bureau of Investigation and the U.S. Department of Justice and whether the FBI and the Justice Department are abusing their law enforcement powers to harass a likely future political opponent of President Biden.

“The public has an urgent and substantial interest in understanding the predicate for the execution of the unprecedented search warrant of the private residence of a former president and likely future political opponent.

“[N]o official explanation or information has been released about the search. As of the filing of this motion, the public record consists solely of speculation and inuendo.

“In short, the historical presumption of access to warrant materials vastly outweighs any interest the government may have in keeping the materials under seal.

“Given the political context, and the highly unusual action of executing a search warrant at the residence of a former President and likely future political opponent, it is essential that the public understands as soon as possible the basis for the government’s action.

“Any government interest in securing the identities of witnesses and confidential sources, if any, may be addressed by appropriate redactions from the search warrant affidavit,” the statement said.

Lauren Boebert Drops Hammer: “When Will Hunter Biden Be Raided?”