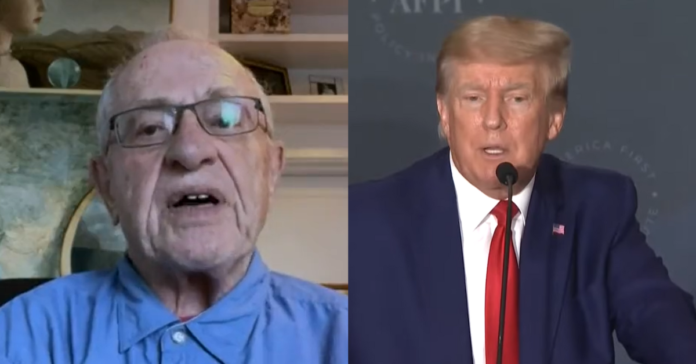 Legal scholar Alan Dershowitz accused the Dems of scheming to stop former President Donald Trump from running in 2024. Dershowitz spoke with John Solomon on Just the News Not Noise where he said:

Dershowitz said Trump’s opponents are making a doomed “attempt to try to get him disqualified from running. I don’t think it’s gonna work. I think it actually, probably has strengthened his base of support.”

“There are three kinds of people out there.

“There are the anti-Trump haters, for whom anything that happens to Trump – professor Laurence Tribe – it doesn’t matter, he’ll trash the Constitution to get Trump.

“Then there are the Trump lovers.

“Doesn’t matter how much evidence they might have, it’s not possible that Trump did anything wrong.

“They don’t want a different rule for Hillary Clinton and Sandy Berger on the one hand, and President Trump on the other hand.

“They want to see equal justice under the law,” he said.

“The decision by the Justice Department to conduct a full-scale morning raid on former President Trump’s Mar-a-Lago home does not seem justified, based on what we know as of now.

“If it is true that the basis of the raid was the former president’s alleged removal of classified material from the White House, that would constitute a double standard of justice.

“There were no raids, for example, on the homes of Hillary Clinton or former Clinton administration national security adviser Sandy Berger for comparable allegations of mishandling official records in the recent past.

“Previous violations of the Presidential Records Act typically have been punished by administrative fines, not criminal prosecution.

“Perhaps there are legitimate reasons for applying a different standard to Trump’s conduct, but those are not readily obvious at this stage.

“The more appropriate action would have been for a grand jury to issue a subpoena for any boxes of material that were seized and for Trump’s private safe that was opened.

“That would have given Trump’s lawyers the opportunity to challenge the subpoena on various grounds — that some of the material was not classified; that previous classified material was declassified by Trump; that other documents may be covered by various privileges, such as executive or lawyer-client.

“Instead, the FBI apparently seized everything in view and will sort the documents and other material without a court deciding which ones are appropriately subject to Justice Department seizure,” he said.

.@AlanDersh Accuses Democrats of Scheming to Prevent Trump from Running: ‘I Want to Have the Right to Vote Against Him’ https://t.co/O9igtZpOFG