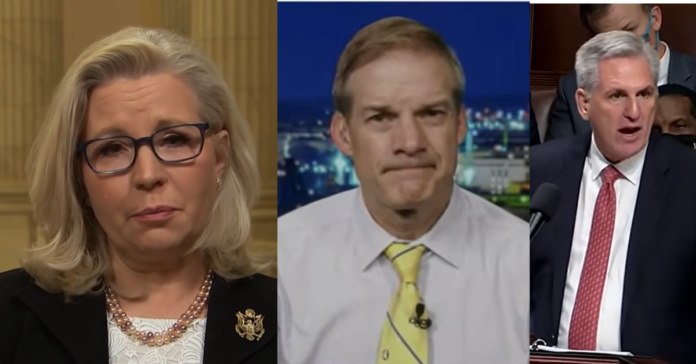 McCarthy and Reps. Jim Jordan of Ohio, Andy Biggs of Arizona, Mo Brooks of Alabama, and Scott Perry of Pennsylvania were subpoenaed after rejecting the committee’s voluntary requests to testify.

The Republican members will tell Cheney and her committee to go pound sand setting up the next crisis for the committee. Because Attorney General Merrick Garland will not interfere with another branch’s business or if he does he will get shut down by the courts.

So another weak desperate hail mary from the left before the GOP retakes power in DC.

The only question is who will the GOP subpoena? Adam Schiff for all the BS he said aout the fake Trump Russia story would be a great place to start.

“The Select Committee has learned that several of our colleagues have information relevant to our investigation into the attack on January 6th and the events leading up to it,” said the committee’s chairman, Rep. Bennie Thompson, D-Miss.

“Before we hold our hearings next month, we wished to provide members the opportunity to discuss these matters with the committee voluntarily. Regrettably, the individuals receiving subpoenas today have refused and we’re forced to take this step to help ensure the committee uncovers facts concerning January 6th,” Thompson added.

“We urge our colleagues to comply with the law, do their patriotic duty, and cooperate with our investigation as hundreds of other witnesses have done,” he said in a statement.

While the select committee has issued subpoenas for McCarthy, Jordan, Brooks, Perry and Biggs, it has also asked GOP Rep. Ronny Jackson to participate in voluntary meetings with investigators. It’s unclear whether the panel will subpoena Jackson in the future.

The panel told Jordan and Brooks in earlier requests for information they would like to discuss conversations the two had with former President Donald Trump regarding his efforts to overturn the outcome of the 2020 presidential election.

The committee believes Biggs participated in meetings at the White House and remotely regarding planning for January 6, including on the strategy for Vice President Mike Pence to reject electoral votes from key battleground states Trump lost in the 2020 presidential election.

The Select Committee has subpoenaed Representatives Kevin McCarthy, Scott Perry, Jim Jordan, Andy Biggs, and Mo Brooks for deposition testimony as part of the committee’s investigation into the January 6th attack on the U.S. Capitol and its causes.

Before we hold our hearings next month, we wished to provide members the opportunity to discuss these matters with the committee voluntarily.

Regrettably, the individuals receiving subpoenas today have refused and we’re forced to take this step.