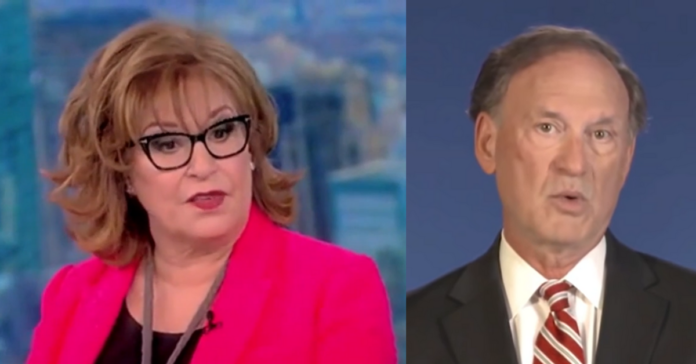 Joy Behar gave up the game on The View today with a typical liberal ‘rules for thee but not for me’ response to the irresponsible protests at the homes of Supreme Court judges.

Behar actually said that Supreme Court Justice Samuel Alito not being able to leave his house easily is a “good lesson” for him.

Guest host Alyssa Farah said she believed the protests outside the houses of justices could be seen as “intimidation” and said taking the protests to the steps of the Supreme Court would be the smarter move.”I worry it could begin to look like intimidation when it’s at someone’s doorstep,” Farah said.

Co-host Whoopi Golberg was not impressed and fired back saying it was “so funny” because “what Alito wrote looks the same way to me, looks like intimidation.”

“Yeah, it’s kind of the same thing,” Goldberg said of the angry mob that has protested outside Brett Kavanaugh Alito, and John Robert’s homes.

Enter Joy Behar to give up the game. She said:

“It also shows Alito what it feels like to lose your freedom of choice, he can not leave the house easily.

“Maybe that’s a good lesson for them.”

Protesters marched to the homes of Justice Brett Kavanaugh and Chief Justice John Roberts on Saturday for a “Candlelight vigil for Roe v. Wade.”

They could be heard chanting “keep abortion safe and legal.”

CRUZ COMPARES ABORTION PROTESTORS TO JAN. 6 RIOTERS: After the Senate passed a bill to increase security for Supreme Court justices and their families, #TheView panel weighs in on Sen. Ted Cruz’s comments as crowds have gathered outside justices’ homes. https://t.co/cVclFZQmjA pic.twitter.com/WRxk26aUED

“In Texas, you see Greg Abbott trying to mimic Donald Trump’s behavior,” @BetoORourke tells #TheView. “He’s not trying to be governor of the state of Texas, he’s trying to get that pole position in the Republican presidential primary.” https://t.co/cVclFZQmjA pic.twitter.com/DHgS8lkeqV

If Mitch Thought He'd Be Senate Leader, What He Just Said Sealed His Fate...He's MUST Go