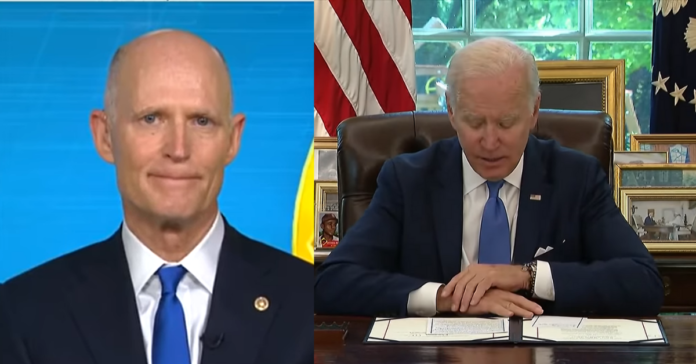 Sen. Rick Scott, the chair of the Senate GOP campaign arm, is calling on President Joe Biden to resign. Scott said Biden is ‘unfit for office’ and ‘incoherent and confused.’

Burgess Everett, POLITICO congressional bureau chief, quoted Scott saying: “Joe Biden is unwell. He’s unfit for office. He’s incoherent, incapacitated and confused. He doesn’t know where he is half the time. He’s incapable of leading and he’s incapable of carrying out his duties.”

Gas prices just hit an all-time high and we are now facing a baby formula shortage under Biden’s failed leadership. And he can’t hide from the truth anymore.

Even in his home state of Delaware people are turning on Biden. Biden’s approval rating is now underwater by 3 points in Delaware a recent poll found.

Biden’s favorability rating in Delaware is 46 percent. His disapproval rating is 49 percent. These are shocking numbers.

Rick Scott says Biden should resign as Biden focuses on his tax plan: “Joe Biden is unwell. He’s unfit for office. He’s incoherent, incapacitated and confused. He doesn’t know where he is half the time. He’s incapable of leading and he’s incapable of carrying out his duties.”

Biden had a 62% approval in Delaware last year. In April of this year it was 50%. Now he is underwater and sinking fast.

Biden is underwater in 41 states. Some of the states Biden holds a net positive approval rating are Vermont, California, Washington, New York, and Maryland.

According to Fox Business:

Gas prices hit a new all-time high on May 10, 2022, amid rising inflation and President Biden’s restrictions on oil and gas production.

According to AAA’s average gas price calculator, the national average cost of a regular gallon of gasoline hit $4.374 on Tuesday, the highest ever according to AAA.

The prices come as the European Union edges toward oil sanctions on Russia amid the Kremlin’s invasion of Ukraine.

It also comes amid record-high inflation, with the consumer price index reaching 8.5% in March.

…According to Yardeni Research, increased oil costs suggest the average American household will pay almost $2,000 more for gasoline in 2022, according to a March research note.

Biden was concerned that the reports would further provoke Russian President Vladimir Putin, The Times reported.

Several media outlets reported last week that the US handed crucial information to Ukrainian forces that allowed them to attack and sink one of Russia’s most prominent warships, the Moskva, on April 14.