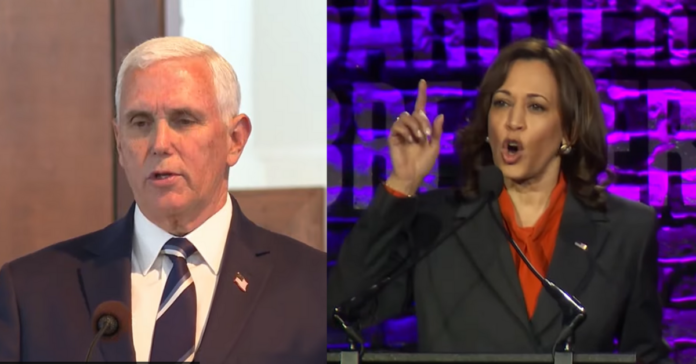 Former Vice President Mike pence fired back at Vice president Kamala Harris in a speech in South Carolina after the bombshell leak of a Supreme Court opinion spelled doom for Roe v Wade. (See Video Below)

“I say with the lives of 62 million unborn boys and girls ended in abortion since 1973, generations of mothers enduring heartbreaking and loss that can last a lifetime: Madame Vice President, how dare you?”

“Roe was egregiously wrong from the start,’ Justice Samuel Alito wrote in the opinion that shook D.C.

“We hold that Roe and Casey must be overruled.

“It is time to heed the Constitution and return the issue of abortion to the people’s elected representatives,” he added.

“In over 200 years of our nation’s history, that has never happened.

“To hell with their obligations to the rule of law, that they would instead try to sneak it out in order to put political pressure on the justices and intimidate them into changing their votes.

“We’re going to find this person.

“And when they’re found, they’re going to be fired on the spot.

“They will be disbarred if they’re a member of the bar, or they will never be admitted to the bar to be a lawyer.

“And to the extent that they’ve broken criminal laws, they need to be prosecuted and sent to jail,” Cruz said.

Pray for the protection and well-being of all the Justices on the Supreme Court of the United States and especially pray that the 5 Justices in the majority opinion leaked this week will have the courage of their convictions to right a historic wrong. pic.twitter.com/kKKY82BARx

Elon Musk's Mom Maye Publicly Shames NYT For Hit Piece On Son: “NY Times, are you going to blame children for decisions made by governments?”