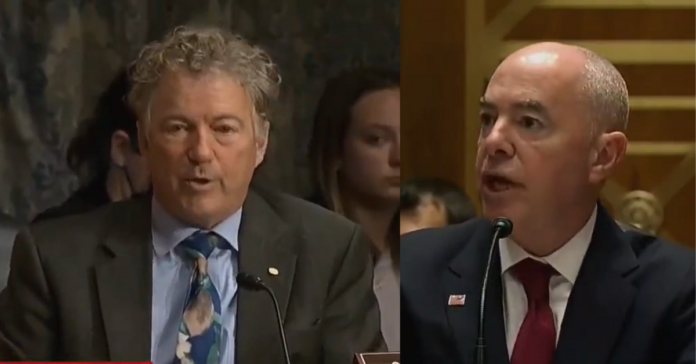 “I want you to have nothing to do with speech. You think the American people are so stupid they need you to tell them what the truth is. (See Vide Below)

“I’ve said a million times that cloth masks don’t work. YouTube takes me down. They’re a private company I can have that beef with him. What about you? You’re going to look at that? I often say that natural immunity from having had the infection is equal to the vaccine or better. You’re going to take that down?

“Are you going to put information out there saying that I’m spreading disinformation?” Paul said.

Mayorkas said his staff “are not the public’s health experts to make those determinations.”

“So public health won’t be part of the Disinformation Governance Board? No COVID disinformation? Yes or no?” Paul fired back.

They argued over hypothetical situations until Mayorkas gave an example of disinformation his department would go after:

“Do not under any circumstances accept the vaccine at a FEMA overseeing vaccination center because they are actually peddling fentanyl.

This is pure 🔥🔥🔥 from @RandPaul on the new “Ministry of Truth” 👇👇👇 pic.twitter.com/hFTzbp7PPs

“Now, should I sit back and take that, or should I actually disseminate accurate information?

“That’s what we’re doing, what we would do.

“Should FEMA issue accurate information that the vaccinations that we are administering in the sites that we oversee actually are the COVID-19 vaccines?”

“And if you think the American people need to be told there’s not fentanyl in the vaccination, feel free to say it.

“But the thing is, is if you are going to go around saying that you’re the arbiter of information and of disinformation, I think you have no clue.

“And you don’t have the perspective of history knowing that disinformation, the largest progenitor of disinformation in our history, has probably been the U.S. government.”

“Do you know, the greatest propagator of disinformation in the history of the world is? The U.S. government.

“Are you familiar with McNamara?

“I mean, think of all the debates and disputes we’ve had over the last 50 years in our country.

“We worked them out by debating them.

“We don’t work them out by the government being the arbiter. I don’t want guardrails. I want you to have nothing to do with speech.

“You think we can’t determine, you know, speech by traffickers is disinformation.

“I don’t trust government to figure out what the truth is. Government is largely disseminating disinformation.”

Today I questioned @SecMayorkas. We work our issues out by debating them, not by making the government the arbiter of truth.

“I want you to have nothing to do with speech…You think the American people are so stupid, they need you to tell them what the truth is?” pic.twitter.com/Tq6mtzluSe