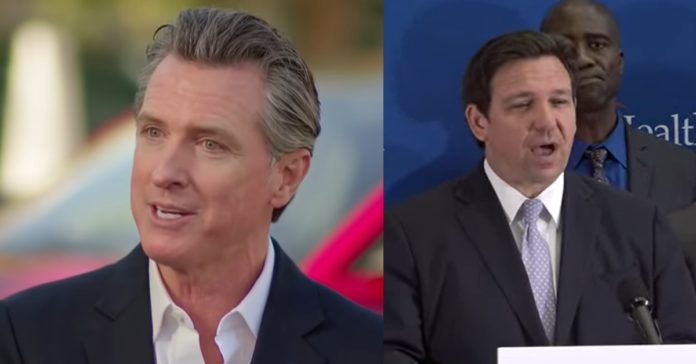 California Governor responded to the devastating string of setbacks suffered by the Dem Party in one year that saw them fall so far and so fast in the polls that Kellyanne Conway said she had never seen anything like it in all her years in politics.

The losses compound for the Dems every time President Joe Biden opens his mouth he is that bad of a speaker. Contrast that with the strong leadership and massive successes of two leading conservative voices, Ron DeSantis and Tucker Carlson, and you can see why Newsom is losing it.

“The attacks on the LGBTQ community? I mean they’re now going after social-emotional learning, I mean, CRT.

America is one of seven countries in the world where elective abortions after 20 weeks are legal. Almost every European country caps their abortion laws after 14 weeks.

Yet, every Democrat in America, even the supposedly moderate ones, support no limits on abortion. https://t.co/Nqzr7S8ilr

“Where is the Democratic Party? Where’s the party?

“Why aren’t we standing up more firmly, more resolutely?

“Why aren’t we calling this out?

“This is a coordinated, concerted effort.

“And yes, they’re winning. They are.

“They have been. Let’s acknowledge that.

“We need to stand up, where’s the counteroffensive?

“It’s about us as Democrats doing a better job to coordinate a more disciplined counteroffensive and message across the spectrum.

“And if nothing else, what more do you need than this decision to wake us up and start asserting ourselves more aggressively.

“All those businesses, ideally you’re moving your companies to states, and then you have to pay for your employees to travel back to the states that you made them move, maybe they should start reconsidering some of those decisions as well.

“That’s why this is about equality, this about women’s rights, it’s so foundational, sorry, Tucker Carlson, it is,” he said.

“I am the byproduct of a rape. My Mom was 11 when I was conceived. My Dad was 21. I was not just a lump of cells. My life has value… My life is valuable and so are the many lives in the womb of their mother.”
pic.twitter.com/UNpNIWzouS

WATCH: "Was that Will Smith?" Chris Rock Ribs Will Smith Joke After Dave Chappelle Attacked on Stage