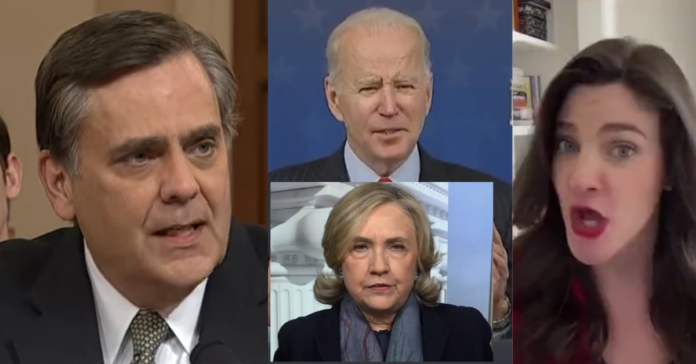 Legal scholar Jonathan Turley called out President Joe Biden’s un-American and unconstitutional Disinformation Governance Board and the Dems who are calling for censorship around the globe. The entire world is laughing at Biden and his team over this one, truly the most incompetent bunch to ever have power in DC.

Turley wrote: “Biden’s new Disinformation Governance Board is a telling replacement for the corporate censorship system. The Disinformation Governance Board needs a catchy slogan. How about “The choice for mankind lies between freedom and happiness and for the great bulk of mankind, happiness is better.” or perhaps “We do not merely destroy our enemies; we change them, “George Orwell, 1984

”The entrance of the Executive Branch into such supervision of facts would seem a matter for legislative debate on the use of public funds for such a purpose. Homeland Security already has a public relations staff that answers questions as well as dozens of offices that release public information. Yet, Secretary Mayorkas wants an actual Disinformation Governance Board to put an imprimatur on what is truth and what is false.

“Now Hillary Clinton is looking to the Europeans to censor social media while Biden is turning to a type of Ministry of Truth.

“Faced with that prospect, Democrats are falling back to their final line of defense – and finally being honest about their past use of corporate surrogates.

“They are now calling for outright state censorship.

“Obama declared: “This is an opportunity, it’s a chance that we should welcome for governments to take on a big important problem and prove that democracy and innovation can coexist.”

“He is talking about imposing “standards” on companies to force them to censor “lies” and “disinformation.”

“As is often the case, former Secretary of State Hillary Clinton stripped away any niceties or nuance.

“Clinton called for the European Union to pass the Digital Services Act (DSA), a measure widely denounced by free speech advocates as a massive censorship measure.

“Clinton warned that governments need to act now because “for too long, tech platforms have amplified disinformation and extremism with no accountability. The EU is poised to do something about it.”

“Clinton’s call for censoring disinformation was breathtakingly hypocritical. President Obama was briefed by his CIA Director John Brennan on “alleged approval by Hillary Clinton on July 26, 2016 of a proposal from one of her foreign policy advisors to vilify Donald Trump by stirring up a scandal claiming interference by Russian security services.”

“The intelligence suggested it was “a means of distracting the public from her use of a private email server.”

“One of Clinton’s former lawyers is under indictment for the effort. Clinton personally tweeted out the disinformation that is the subject of the federal prosecution. And the Federal Election Commission recently fined her campaign for hiding the funding of the Steele dossier.

“Given that history, it would be easy to dismiss Clinton’s calls as almost comically self-serving.

“However, the 27-nation EU just did what she demanded. It gave preliminary approval to the act, which would subject companies to censorship standards at the risk of punitive financial or even criminal measures,” he wrote.

Biden’s new Disinformation Governance Board is a telling replacement for the corporate censorship system. https://t.co/enjVzUqirS Now Clinton is looking to the Europeans to censor social media while Biden is turning to a type of Ministry of Truth. https://t.co/oxcOiJes3U

They got it done! https://t.co/Wc4kA9DPsb

Ron DeSantis Overrules Joe Biden: ‘We reject this bureau in the state of Florida, we’re not going to let Biden get away with this one so we will be fighting back”

South Carolina Dem Switches To Republican Party: "I am for funding the police”