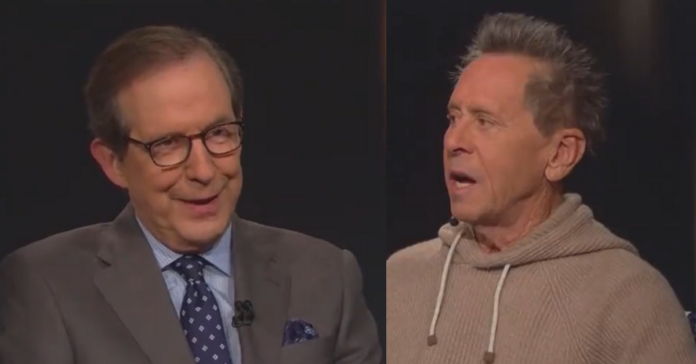 During a recent interview for the media flop of the century, CNN+, host Chris Wallace tried to pitch legendary film producer Brian Grazer on a project based on the Chris Wallace Donald Trump interviews.

Wallace played a clip of the movie Frost/Nixon. “Frost/Nixon is a 2008 historical drama film based on the 2006 play of the same name by Peter Morgan, who also adapted the screenplay. The film tells the story behind the Frost/Nixon interviews of 1977. The film was directed by Ron Howard. The film was produced for Universal Pictures by Howard, Brian Grazer of Imagine Entertainment.”

Wallace then asked: “So, I have to ask a question. When we got to know each other a little better, you said to me one time that you thought there was a possible project in Trump/Wallace.”

“I did. I didn’t know you’d bring that up. Umm—,” Grazer said caught off guard.

“Did you really believe that,” Wallace pressed.

“Your interviews with him were perfect,” Grazer said.

WALLACE: So, maybe we’ll talk after the—

WALLACE: — the thing about going to do it.

GRAZER: Just to do it live in a stadium would be amazing

Wallace said earlier that he is not sure what his future holds.

“Now suddenly streaming is in an ICU on life support. I have absolutely no idea which is right and which is wrong, but the Discovery people are in charge and so they’ve made the decision.”

He continued: “I’m in good shape, whether it’s CNN or someplace else.

“Frankly, what I’m mostly concerned about right now, and very, is my team and hundreds of other people that had jobs at CNN+.

“Some of them had left CNN to go to streaming.

“Some of them had left other places, moved across the country.

“And so, I think you’re seeing a lot of the anchors at CNN+ doing everything they can to protect the people that were working on their team and to make sure they either get a safe landing at CNN or someplace else,” Wallace said.

After playing a clip from Frost/Nixon on his failed CNN+ show on Monday, Chris Wallace questioned Hollywood producer Brian Grazer about possibly doing a movie about his interviews with former President Trump: “Trump/Wallace”
“Your interviews with him were perfect,” Grazer said. pic.twitter.com/RDPdk4Jbpj