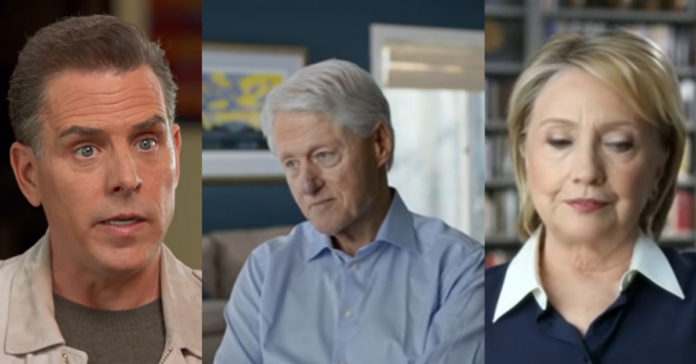 Hunter calls Bill “an a**hole who looks like sh*t” in one exchange. In other exchanges, he called out the corruption of top Clinton aides who were  “petty, greedy, venal, low rent bullsh*t” for taking government salaries while also getting paid in the private sector.

On April 8, 2016, Schwerin shared a video clip of Bill Clinton blaming the crime bill that was hurting Hillary in the Dem primary campaign on Joe Biden. “Hillary didn’t vote for that bill, because she wasn’t in the Senate,” Bill Clinton said.

“She was spending her time trying to get health care for poor kids – who were they? And their lives matter.”

Schwerin said: “But it is still called the Clinton Crime Bill.”

“Oddly enough,” Mackler said. “After unnecessarily throwing Joe Biden under the bus he gave a damn forceful pro-minority defense of the crime bill.”

In a March 2015 email exchange with Mackler, Hunter Biden trashed the Clintons’ longtime top aides Doug Band and Huma Abedin as “greedy” for taking government salaries while also getting paid in the private sector.

“Are you f*cking kidding me. How greedy can you possibly be?” Hunter said.

They responded to an article from the Washington Post that said:

“For f*ck’s sake. This is incredible. It never ends,” Mackler said.

“Truly absurd. If this is acceptable then would it also have been acceptable for Ron Klain to remain general counsel of Revolution while acting as COS for the VP?” Hunter said.

We know Joe Biden was not happy with Hillary Clinton being the 2016 nominee and that he felt snubbed when Obama backed her without talking to him. We also know Joe sent Hunter emails with articles showing Hillary was flailing in her campaign with comments that make it clear he thought he should have been the Dems pick.

And that may be the reason Joe Biden and Merrick Garland are not interfering in Special Counsel John Durham’s probe of Hillary’s campaign.

Garland could shut it down or he could micromanage the probe.

Durham is making clear in his court filings that he believes the Clinton campaign engaged in a conspiracy.

He is doing this knowing he may not be able to trace it all the way back to the top and make criminal charges stick on Hillary or Robbie Mook or Marc Elias.

So he is laying out his case in his filings so America knows what happened.

If Graland wanted to he could step in and protect Hillary.

But he has not so far. This is bad news for Hillary if it turns out she needs a pardon.

Lauren Boebert Fires Back At Elizabeth Warren: “I think claiming you're a Native American solely for your own professional and political gain is dangerous to our democracy, Senator Karen”