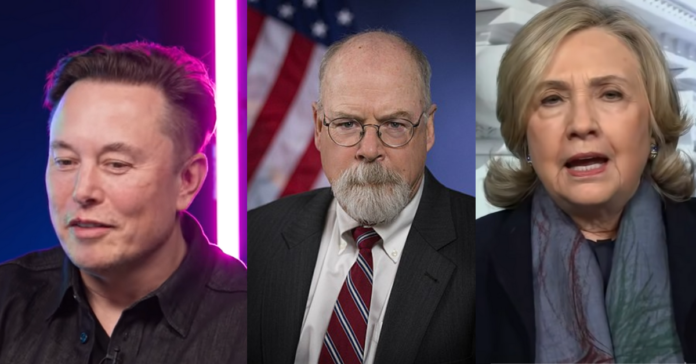 New Twitter owner Elon Musk broke his silence on Special Counsel John Durham’s ongoing investigation into the Trump Russia story that has one lawyer for the Hillary Clinton campaign facing trial next month.

Twitter philosopher Mike Cernovich asked Musk to comment on the fact that Hillary’s lawyer, Michael Sussman’s contact inside the FBI to spread the bogus story about Trump Russia connections is now Deputy General Counsel at Twitter.

Cernovich said: “Twitter lawyer Jim Baker, when general counsel of the FBI, personally arranged a meeting between the FBI and Michael Sussmann. In this meeting, Sussmann presented fabricated evidence in the Alfa bank matter. @elonmusk, this is who is inside Twitter. He facilitated fraud.”

Cernovich later said after the left lost its collective mind:

“The left is losing their mind. All I did was link to a truthful article about a high level Twitter lawyer, Jim Baker, who facilitated a meeting between a disinformation peddler and the FBI.”

The Fox News article is from October 2021 where Durham says he would call Baker as a witness:

“During a virtual status hearing Tuesday, government prosecutors on Durham’s team signaled their intention to call Baker to testify as part of the Sussmann case. Sussmann has pleaded not guilty to one count of making a false statement to a federal agent.”

Legal scholar Jonathan Turley has some good thoughts about what could be the biggest scandal in American history.

Turley wrote: “He is now moving to give immunity to a key witness while revealing that the claims made by the Clinton campaign were viewed by the CIA as “not technically plausible” and “user created.”

“He also revealed that at least five of the former Clinton campaign contractors/researchers have invoked the Fifth Amendment and refused to cooperate in fear that they might incriminate themselves in criminal conduct.

Turley noted that this is the first time Durham has provided details of the Hillary Clinton campaign associates who have refused to testify. Durham wrote according to Turley:

“The only witness currently immunized by the government, Researcher-2, was conferred with that status on July 28, 2021 – over a month prior to the defendant’s Indictment in this matter. And the Government immunized Researcher-2 because, among other reasons, at least five other witnesses who conducted work relating to the Russian Bank-1 allegations invoked (or indicated their intent to invoke) their right against self-incrimination. The Government therefore pursued Researcher-2’s immunity in order to uncover otherwise-unavailable facts underlying the opposition research project that Tech Executive-1 and others carried out in advance of the defendant’s meeting with the FBI.”

Turley also believes Durham is closing on the Clinton campaign. He wrote:

“According to Durham, the Alfa Bank allegation fell apart even before Sussmann delivered it to the FBI.

“There were many who expressed misgivings not only within the companies working on the secret project but also among unnamed “university researchers” who repeatedly said the argument was bogus.

The researchers were told they should not be looking for proof but just enough to “give the base of a very useful narrative.”

“Researcher-1” repeated these doubts, the indictment says, and asked, “How do we plan to defend against the criticism that this is not spoofed traffic we are observing? There is no answer to that. Let’s assume again that they are not smart enough to refute our ‘best case scenario.’ You do realize that we will have to expose every trick we have in our bag to even make a very weak association.”

“The only thing that drives us at this point is that we just do not like [Trump]. This will not fly in eyes of public scrutiny. Folks, I am afraid we have tunnel vision. Time to regroup?”

Durham also detailed how the false claims related to Alfa Bank involved Clinton General Counsel Marc Elias and Christopher Steele. Indeed, the new requested immunized testimony would come from a Tech executive who allegedly can share information on meetings with Elias and Steele.

Some Very Big Conservative Names Just Made "Comebacks" On Twitter