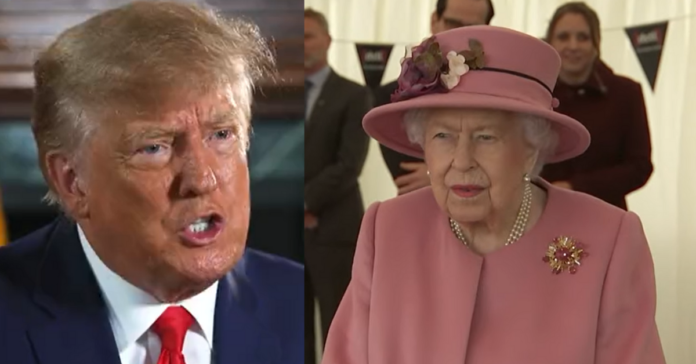 Former President Donald Trump sat down for an interview with Piers Morgan where Trump told Queen Elizabeth to strip Prince Harry and Meghan Markle of all their royal titles.

He said Megan was leading Harry around by his nose and predicted Harry and Megan’s relationship will end badly “Harry is whipped. Do you know the expression?” Trump asked Morgan. “I’m familiar with the phrase,” Morgan said.

Trump said: “I won’t use the full expression but Harry is whipped like no other person I think I’ve seen. I’m not a fan of Meghan. I’m not a fan and I wasn’t right from the beginning. I think poor Harry is being led around by his nose. And I think he’s an embarrassment.

“And I think she spoke badly of the royal family but in particular the Queen.”

*NEW CLIP*
‘Harry is a whipped man.. like no person I’ve ever seen.’ – President on the Prince… my explosive Trump interview airs tonight on ⁦@PiersUncensored⁩ ⁦@TalkTV⁩ 8pm. 🔥🔥🔥 pic.twitter.com/dtaNqnXond

“She liked me and I liked her,” Trump said of Queen Elizabeth. Trump said he thinks the pair should be stripped of their royal titles.

“The only thing I disagree with the Queen on probably one of the only things ever is that I think she would have said, ‘If that’s your choice, fine.

“But you now longer have titles.’ You know?”

“‘I think that he has been so disrespectful to the country, and it’s a great country,” Trump said. “I own a lot of things there.”

Trump also predicted the two young royals would not last.

“So, I want to know what’s going to happen when Harry decides he’s had enough of being bossed around,” he said.

“Or maybe when she decides that she likes some other guy better. I want to know what’s going to happen when it ends, OK?”

“I’ve been a very good predictor, as you know. I predicted almost everything. It’ll end and it’ll end bad.

“And I wonder if Harry’s gonna go back on his hands and knees, back into the beautiful city of London and say, ‘Please.’ You know, I think Harry has been led down a path.”

Biden Admin to Return Diplomats Back To Kyiv; Will Also Give MORE Aid