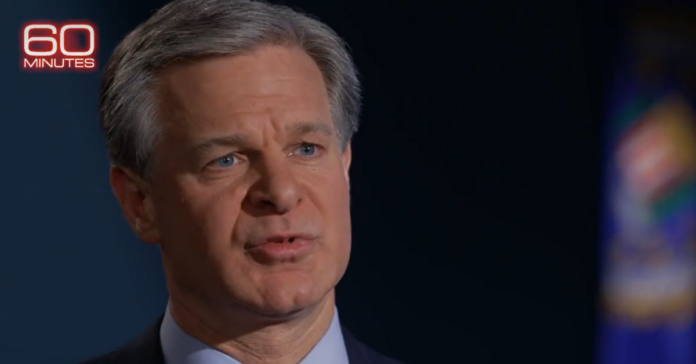 FBI Director Christopher Wray addressed the alarming rise in crime in America and the rising rate of murders against police officers Sunday on 60 Minutes saying “we’re seeing an alarming frequency of some of the worst of the worst getting back out on the streets.”

Scott Pelley: Let’s switch for a moment from counterintelligence to crime fighting. In 2020, there was a 29% jump in murder in the United States, nearly 5,000 more people killed than the year before. What is behind this leap in homicide?

Scott Pelley: In 2021, there was a 59% increase in the murders of police officers, 73 officers killed.

Christopher Wray: Violence against law enforcement in this country is one of the biggest phenomena that I think doesn’t get enough attention. Last year, officers were being killed at a rate of almost one every five days.

Scott Pelley: But why are more officers being killed right now?

Christopher Wray: Some of it is tied to the violent crime problem as a whole. But one of the phenomena that we saw in the last year is that an alarming percentage of the 73 law enforcement officers killed in the line of duty last year were killed through things like being ambushed or shot while out on patrol.

Scott Pelley: They were killed because they were police officers.

Christopher Wray: I heard about Laura and Dan’s murders (FBI agents Laura Schwartzenberger and Daniel Alfin) within really moments of it happening, from our Miami Field Office. And I was on the phone with their spouses within a few hours. And I was in their living rooms the next morning. And my reaction was a feeling of ache, almost sickness, inside– in my distress.  you know, it’s the hardest thing I’ve encountered in this job.

Scott Pelley: Can you say you’re making any headway in violent crime?

Christopher Wray: We are working very hard with our partners, state and local law enforcement partners, through task forces, task forces all over the country. And through surging rapid deployment teams to try to combat violent crime in specific hot spots. Last year I think we arrested something like 15,000 violent gang members around the country. And part of what fuels us to pursue this mission is our deep conviction that law enforcement’s most sacred duty is to ensure that people can live free from fear in their own homes and neighborhood’s.

Scott Pelley: But Mr. Director, some people are in their homes living in fear of the police coming through the door with a no-knock warrant. And I wonder how the FBI can contribute to the reduction of police brutality, which also occurs in our country?

Christopher Wray: Well, we take very seriously our responsibility to both protect the American people and uphold the Constitution. And that includes where it happens, going after police misconduct if it violates federal criminal law.

Violent crime is up in the U.S., and in 2021, there was a 59% increase in murders of police officers. FBI Director Wray says “an alarming percentage” of the officers killed were killed in ambushes. “Wearing the badge shouldn’t make you a target.” https://t.co/G4EN7xhOpQ pic.twitter.com/akb4AQwbvP

FBI Director Wray tells 60 Minutes his promise to the American people is that the Bureau “will follow the facts wherever they lead, to whomever they lead, no matter who likes it.” https://t.co/QyqfClAu8h pic.twitter.com/VOfoYOMnnM