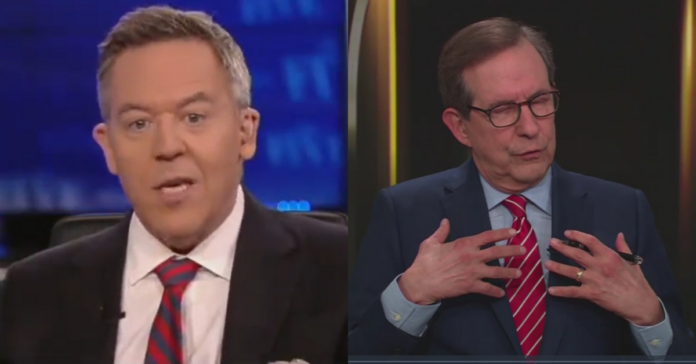 Fox News star Greg Gutfeld took a few swipes at former colleague Chris Wallace after CNN Plus, the streaming service that hired Wallace after he left Fox News, folded after a month. Wallace if you recall took a few shots at some of his Fox colleagues when he left.

Gutfeld felt it was time for a little payback. He said on rising crime in New York City: “BLM has done to black people what Chris Wallace has done to CNN+. Entice them with a promise and then ditch them on the side of the road.”

During a segment on climate change, Greg said, “A lot of these solutions that are coming from the left are unreliable, whether it’s solar panels or windmills. I mean look at CNN+, how much money they invested in wind power by hiring Chris Wallace.”

And he played a video of a wild buffalo walking the streets and said, “I just looked out at Sixth Avenue and who did I see just hanging out in front of a tavern? None other than, guess…Chris Wallace.”

“They got some blowhard from NYU, Scott Galloway, talking about tech, I mean the guy,  I don’t understand why people would tune into this guy, and I guess, Chris Wallace, the aforementioned Chris Wallace.

Tucker Carlson laughed and said: “I’m with you, man.”

“Congratulations to CNN+ on their decision to immediately FOLD for a lack of ratings, or viewers in any way, shape, or form.

“It was like an empty desert out there despite spending hundreds of millions of dollars and the hiring of low-rated Chris Wallace, a man who tried so hard to be his father, Mike, but lacked the talent and whatever else is necessary to be a star.

“In any event, it’s just one more piece of CNN and Fake News that we don’t have to bother with anymore!”

“Warner Bros. Discovery, the new owners of CNN, pulled the plug on CNN+ with a shutdown date of April 30.

[VIDEO] Sitting Down? Biden Just Said Something Every Single MAGA Patriot Will Love and Agree With