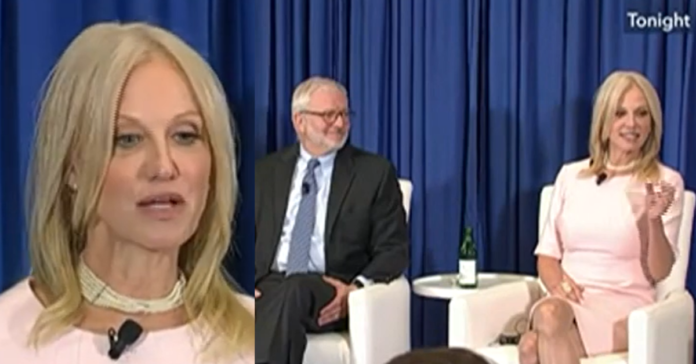 Kellyanne Conway, a former senior adviser to President Donald Trump, slammed the media and defended her former boss’s use of social media during a panel discussion at the Bipartisan Policy Center. (See Video Below)

She said of Trump changing the game through his use of social media: “Whether you liked it or not, the fact is that people received instantly and for free a presidential communication and it cut out the middleman and the middleman did not like it.

“But a lot of Americans did because they don’t have to pay money to go to a fundraiser, they don’t have to know someone who knows someone to get them the information, it’s right there, and if you don’t like it, you could change the channel.”

“How did I deal with it?” Conway said when asked about the toll it took on her family especially after her husband George Conway was a loud voice against Trump.

“I was a lot nicer to people than they were to me, and to my family, that’s for sure, that will never change.

“Some of you are in that room and we know that, we see you, and it is completely inappropriate to become so personal to people who are just trying to do your job.”

Kellyanne has a new book coming out soon. The publisher describes the book:

“As a highly respected pollster for corporate and Republican clients and a frequent television talk show guest, Kellyanne Conway had already established herself as one of the brightest lights on the national political scene when Donald Trump asked her to run his presidential campaign.

“She agreed, delivering him to the White House, becoming the first woman in American history to manage a winning presidential campaign, and changing the American landscape forever.

“Who she is, how she did it, and who tried to stop her is a fascinating story of personal triumph and political intrigue that has never been told…until now.

“In Here’s The Deal, Kellyanne takes you on a journey all the way to the White House and beyond with her trademark sharp wit, raw honesty, and level eye.

“It’s all here: what it’s like to be dissected on national television. How to outsmart the media mob.

“How to outclass the crazy critics. How to survive and succeed male-dominated industries. What happens when the perils of social media really hit home.

“And what happens when the divisions across the country start playing out in one’s own family.

“In this open and vulnerable account, Kellyanne turns the camera on herself.

“What she has to share—about our politics, about the media, about her time in the White House, and about her personal journey—is an astonishing glimpse of visibility and vulnerability, of professional and personal highs and lows, and ultimately, of triumph,” her publisher wrote.

“The Dems are going to take care of the son of a b*tch for us”: Mitch McConnell Applauded Trump’s Second Impeachment According To New Book