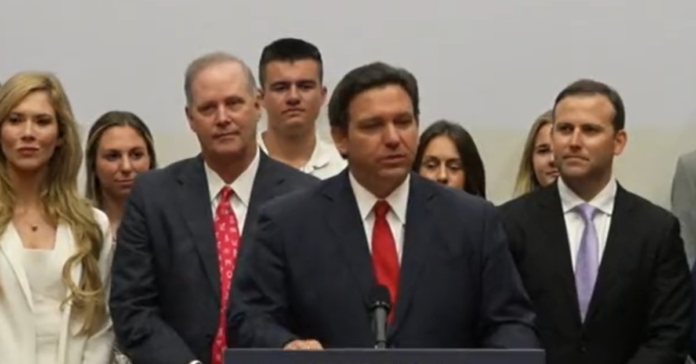 Florida Governor Ron DeSantis put the Disney Corporation on notice and called for a special session to terminate the special deal the state of Florida gave Disney a long time ago.

Ron said: “In addition to congressional reapportionment, this week’s special session will include termination of legacy special districts and removal of exemptions from the big tech accountability law.”

The proclamation says: WHEREAS, the Florida Constitution of 1885 did not prohibit special laws granting privileges to private corporations; and

WHEREAS, the Florida Constitution was revised by the Florida electorate on November 5, 1968; and

In addition to congressional reapportionment, this week’s special session will include termination of legacy special districts and removal of exemptions from the big tech accountability law. pic.twitter.com/67sF4E113I

WHEREAS, the Florida Constitution of 1968 generally disfavors special laws as opposed to general laws, but permits the creation of independent special districts that appropriately serve the public interest; and

WHEREAS, Article III, Section 11(a)(12) of the Florida Constitution of 1968 prohibits special laws granting privileges to private corporations; and

WHEREAS, independent special districts exist that were established prior to November 5, 1968, and that have not been re-established, ratified, or otherwise reconstituted by a special act or general law after November 5, 1968; and

WHEREAS, it is necessary to review such independent special districts to ensure that they are appropriately serving the public interest; and

WHEREAS, it is also necessary to consider whether such independent special districts should be subject to the special law requirements of the Florida Constitution of 1968; and

WHEREAS, it is further necessary to periodically review exceptions to generally applicable laws that are given to select corporations; and

WHEREAS, on May 24, 2021, Florida enacted the first-of-its-kind law to protect consumers from arbitrary censorship by social media platforms; and

WHEREAS, the law, Section 501.2041, Florida Statutes, exempts any company that owns and operates a theme park or entertainment complex from the definition of a “social media platform”; and

WHEREAS, on June 30, 2021, a federal court temporarily enjoined Section 501.2041, Florida Statutes, in part because such exemption would likely not survive under the First Amendment; and

WHEREAS, the federal court questioned whether it could sever the exemption for theme parks and entertainment complexes because the court concluded that (i) the Legislature was “apparently unwilling to subject favored Florida businesses to the statutes’ onerous regulatory burdens” and (ii) the court could not “impose these burdens on the statutorily excluded entities when the Legislature has not passed, and the Governor has not signed, a statute subjecting these entities to these requirements,” NetChoice, LLC v. Moody, 546 F. Supp. 3d 1082, 1094 (N.D. Fla. 2021); and

WHEREAS, Florida appealed this ruling to the United States Court of Appeals for the Eleventh Circuit in Case No. 21-12355; and

WHEREAS, oral argument before the Eleventh Circuit is scheduled to occur on April 28, 2022, and Florida must prevail in its position that a state can regulate the arbitrary and inconsistent censorship practices of social media platforms due to the platforms’ unprecedented power over the free flow of information and ideas; and

WHEREAS, the law’s exemption for theme parks and entertainment complexes is severable from and unnecessary to effectuate the law regulating social media platforms; and

WHEREAS, the Legislature should make clear that Florida intends to continue to protect consumers from the arbitrary and inconsistent censorship of social media platforms in a viewpoint-neutral manner; and

WHEREAS, it is prudent to expand the call for this Special Session.

NOW, THEREFORE, I, RON DESANTIS, Governor of the State of Florida, by virtue of the power and authority vested in me by Article III, Section 3(c)(1) of the Florida Constitution, do hereby proclaim as follows:

Section 1. The call to the Legislature of the State of Florida for this Special Session is expanded for the sole purpose of considering (a) legislation relating to independent special districts, and (b) legislation to amend Section 501.2041, Florida Statutes.