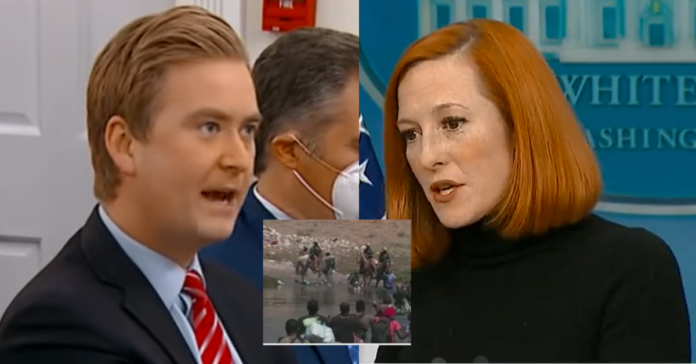 Fox News reporter grilled White House Press Secretary Jen Psaki today over a story many missed from late last week. President Joe Biden, Jen Psaki, and many others in the Dem Party trashed the mounted border patrol agents who went viral protecting the border before all the facts were in.

Doocy asked: “We’ve been told mounted Border Patrol officers the president accused of whipping migrants were told they will not be criminally charged so when is the President going to apologize to them.” Psaki tried to dodge the question.

Doocy fired back: “The president said they were whipping people which would be a criminal offense and they have been told they will not be criminally charged.” (See video below)

“And there was an investigation so I will let DHS address that.”

Doocy wasn’t having it and said: “You accused these officers of brutal and inappropriate measures will you apologize.”

She gave a nonanswer and moved on.

Biden said of the mounted border patrol agents at the center of the infamous “whipping” photos: “Running them over and people being strapped, it’s outrageous and I promise you those people will pay.”

Department of Homeland Security Director Alejandro Mayorkas was furious saying the department was handling the situation with “tremendous speed and tremendous force.”

But Fox News correspondent Lucas Tomlinson reported the network “has learned that officials have cleared the horse-mounted border patrol agencies of wrongdoing after they were accused of whipping migrants in September and placing them on probation.”

Bret Baier said, “we are just getting to the back end of this investigation where the guys are not being punished; Brit, and remember how much coverage was given to that moment.”

Brit Hume said: “Right and you know at first it looked bad. And the explanation was available within a matter of 24 or 48 hours.

“It didn’t stop President Biden from coming out and saying these border agents were going to pay.

“He has been notably silent on this since and now we know probably was inevitable that they have been cleared of doing anything wrong there.

“They were using their reigns to deal with the horses. This is another example of the administration on the border and border issues.

“They slow-walk these issues because I think in the end they believe that their constituents in the Democratic Party want these migrants to come and come by the hundreds of thousands,” he said.

🚨🚨 Doocy: Now that the Border Patrol agents falsely accused of “whipping” illegal aliens have been cleared, will you or the president apologize for slandering them?

Psaki: “I don’t have any comment on that.” #BidenBorderCrisis pic.twitter.com/hqILqWYjwL

.@pdoocy asks whether @JoeBiden will apologize to the Border Patrol, and whether @PressSec herself will do so.

She declines on both counts.

A total lack of decency; she implies her earlier, unjustified condemnation had been vindicated by the mere existence of an investigation.