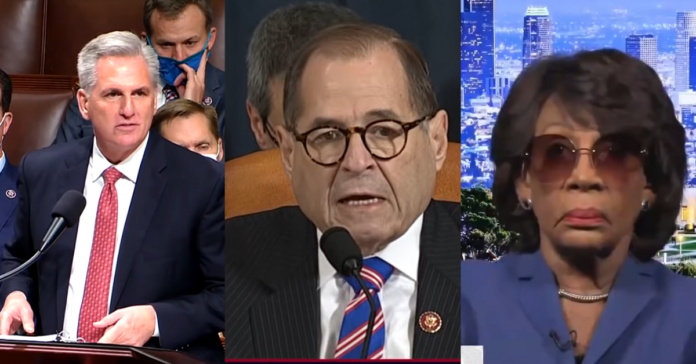 House Republicans are considering some massive changes after they take power in 2022. They have hinted at payback over the Dems removing some of their members from committees so Ilhan Omar and Adam Schiff can expect to lose their positions.

And according to a new report, they won’t be the only ones because the GOP is also considering mandating term limits for committee chairs and ranking members. This would not affect the GOP much as they already limit their own members to three consecutive terms leading any committee.

But the Democrats do not have limits. Which allows their members to control powerful committees long enough to turn them into little fiefdoms. Lobbyists shower leaders of certain committees with special attention as these are the people in Congress who actually write the laws.

So they are the ones who can sneak in little favors.

One GOP Rep told his constituents that it costs around $1 million in donations paid to the Party to get one of these powerful positions.

The GOP Rep said lobbyists usually pay it thus setting up a swampy conflict of interest.

Two of the big names who would lose out if the GOP makes the rule change is Jerry Nadler and Maxine Waters.

According to Punchbowl News:

Such a move by Republicans if they take the majority would drastically alter the makeup of the House.

For example, under this plan in a GOP majority, the following Democrats would be barred from serving as ranking member:

Rep. Maxine Waters of California has been the top Democrat on Financial Services since 2013.

Rep. Bennie Thompson of Mississippi has been the top Democrat on Homeland Security since 2005.

Rep. Frank Pallone of New Jersey has been the top Democrat on the Energy and Commerce since 2015.

Rep. Adam Smith of Washington State has been the top Democrat on the Armed Services Committee since 2011.

Rep. Nydia Velázquez of New York, who has been the top Democrat on the Small Business Committee since 1998.

Reps. Jerry Nadler of New York and Richie Neal of Massachusetts are currently in their third terms as the top Democrats on their respective panels. Under this new GOP proposal, they wouldn’t be eligible for a fourth.

NEWS in @PunchbowlNews this AM: House Republicans are considering writing term limits for chairs and ranking members into House rules if they take the majority. it would be a drastic shift in power in the House.