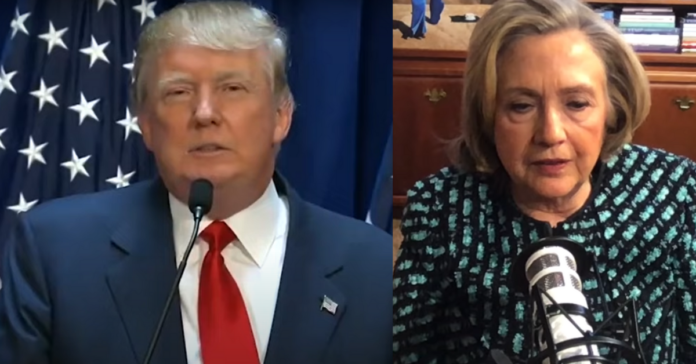 Former President Donald Trump sued Hillary Clinton and several other Democrats claiming they smeared him with false ties to Russia. He is asking for more than $72 million in damages, an amount that is triple the $24 million in legal fees and other damages Trump claimed he suffered.

“Acting in concert, the Defendants maliciously conspired to weave a false narrative that their Republican opponent, Donald J. Trump, was colluding with a hostile foreign sovereignty,” Trump alleged in a lawsuit filed in federal court in Florida.

“In the run-up to the 2016 Presidential Election, Hillary Clinton and her cohorts orchestrated an unthinkable plot – one that shocks the conscience and is an affront to this nation’s democracy.

“Acting in concert, the Defendants maliciously conspired to weave a false narrative that their Republican opponent, Donald J. Trump, was colluding with a hostile foreign sovereignty.

“The actions taken in furtherance of their scheme—falsifying evidence, deceiving law enforcement, and exploiting access to highly-sensitive data sources – are so outrageous, subversive and incendiary that even the events of Watergate pale in comparison.

“Under the guise of ‘opposition research,’ ‘data analytics,’ and other political stratagems, the Defendants nefariously sought to sway the public’s trust.

“They worked together with a single, self-serving purpose: to vilify Donald J. Trump. Indeed, their far-reaching conspiracy was designed to cripple Trump’s bid for presidency by fabricating a scandal that would be used to trigger an unfounded federal investigation and ignite a media frenzy,” the filing says.

Enter Special Counsel John Durham and his latest Friday night filing. Durham said the CIA concluded the Trump Russia data was not “technically plausible” and was “user created and not machine/tool generated, contained gaps, conflicted with itself,” and did not “withstand technical scrutiny.”

Trump is alleging conspiracy in his lawsuit and one of the few defenses Hillary and her team have is that ‘the data is the data’ and it can be interpreted in that way. But if the CIA is right and it was fabricated, (Durham makes clear he has not come to that conclusion but the CIA did) it seems Trump is well on his way to proving the conspiracy in court.

Durham’s filing said: “At a minimum, however, the Government does expect to adduce evidence at trial reflecting (i) the fact that the FBI and Agency-2 concluded that the Russian Bank-1 allegations were untrue and unsupported and

(ii) the primary bases for these conclusions, including the particular investigative and analytical steps taken by these agencies.

(For example, while the FBI did not reach an ultimate conclusion regarding the data’s accuracy or whether it might have been in whole or in part genuine, spoofed, altered, or fabricated, Agency-2 concluded in early 2017 that the Russian Bank-1 data and Russian Phone Provider-1 data was not “technically plausible,” did not“withstand technical scrutiny,” “contained gaps,” “conflicted with [itself],” and was “user created and not machine/tool generated.” The Special Counsel’s Office has not reached a definitive conclusion in this regard.)

Durham’s filing also says he has witnesses that will refute Hillary’s lawyer’s defense. If so would he make a deal? That is probably the only way they will get to Hillary and remember, Biden and Hillary, do not have the best relationship. He’s still pissed everyone backed Hillary in 2016.

Durham’s filing says: “Nor does the defendant’s attempt to distance himself factually from the origins of the purported data and allegations aid his argument. As an initial matter, the Government has already proffered to the Court and/or expects to offer at trial considerable evidence that the defendant – a former DOJ cyber lawyer who identified himself as an expert in privacy, cybersecurity, and technology law – was involved in and/or aware of the data’s origins.

For example: Days before his meeting with the FBI, the defendant emailed Researcher-2 – the author of one of the relevant white papers and one of the primary researchers who analyzed the Russian Bank-1 allegations – stating that they had a mutual friend, referring to Tech Executive-1.

Also in mid-September 2016, Researcher-2 left a voicemail for the defendant at his office seeking to speak with him.

If called as a witness, Researcher-2 would testify that soon thereafter, he spoke with the defendant and raised concerns about whether the data concerning Trump and Russian Bank-1 was being unlawfully collected and used.

Reflecting sufficient awareness of the data’s origins to opine on the issue, the defendant assured Researcher-2 that the data had, in fact, been lawfully collected and used.

Researcher-2 would testify, in particular, that the defendant stated that the data was collected under contracts for what is described as “passive DNS” collection, and that the use of the data complied with principles of “informed consent.”

Researcher-2 would further testify that he understood the defendant to be familiar with the “corporate sources” of the relevant data.

Billing records demonstrate that in September 2016, the defendant billed the Clinton Campaign for “drafting” a “white paper,” which, in context, referred to the Russian Bank-1 white paper—reflecting that the defendant had enough familiarity with the data and relevant subject matters to assist in crafting the relevant analysis.

Testimony at trial will further establish that during his meeting with Agency-2, the defendant described the relevant Russian Bank-1 and Russian Phone Provider-1 data as “private collection,” distinguishing it from Government-collected data,” the filing says.

Donald Trump has filed a sprawling RICO case against Hillary Clinton and others, alleging a conspiracy to make him look compromised by Russia.