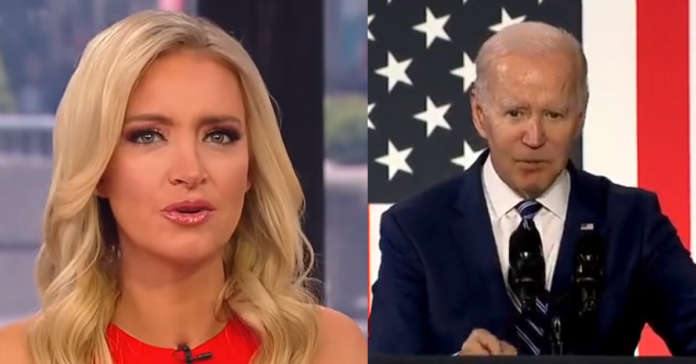 Former Trump White House press secretary Kayleigh McEnany went on “Jesse Watters Primetime” and issued a warning to President Joe Biden. She said with his numbers historically bad, he can expect to be primaried by a Dem challenger.

She said she researched other presidents, their polling numbers, and who got primaried to determine that Joe Biden is doomed. Like Jimmy Carter was doomed. And the Dem Party will go down with him unless they abandon ship.

Rarely do presidents who get primaried from within their own party win reelection. With Biden sitting at 33% approval in one poll and still making dumb moves (see title 42, handshake with air) the question is how low can he go.

McEnany said when then-President Gerald Ford was challenged by former California Gov. Ronald Reagan in 1976 his presidential approval had sunk to 42%.

Kayleigh said Biden, with inflation, is looking a lot like Jimmy Carter statistically before warning Joe:

“Primary challengers are going to line up right beside you.”

“So, what is left?” she said before adding that Biden has an approval among Dem voters of 77% while Trump had in the mid-90s.

A CNN pollster agreed saying Trump has better numbers than Biden at this time and overall Joe’s numbers are “really, really, really bad.”

“Well, at this point in his presidency, Donald Trump’s numbers, actually his average approval rating is one point higher than Joe Biden’s, which is at forty one percent.

“Donald Trump at 42 percent, a first term president at this point in his presidency. This is the lowest.

“This is the lowest for anyone who is elected to the presidency and didn’t get up there through the vice presidency.

Democrats, I have terrible news for you.

We’ll give you a minute to think about what you did to make this happen. https://t.co/3q3Rl02X6o

I can’t believe this is the President’s pocket card!

I’m surprised it didn’t start with: “Hi, my name is President Biden…” https://t.co/8fzQAw3lbE

When DeSantis was elected in 2018, Florida had 280,000 more registered Dems than Republicans.

Today, registered Republicans outnumber Dems in Florida by over 100,000 for the first time.

CNN Says Joe Biden’s Approval' Lowest For Any President At This Point In 1st Term: “This is the lowest for anyone who is elected to the presidency and didn’t get up there through the vice presidency”

We All Knew It Was Coming....Regime Now Going After Elon Musk to Thwart Twitter Purchase