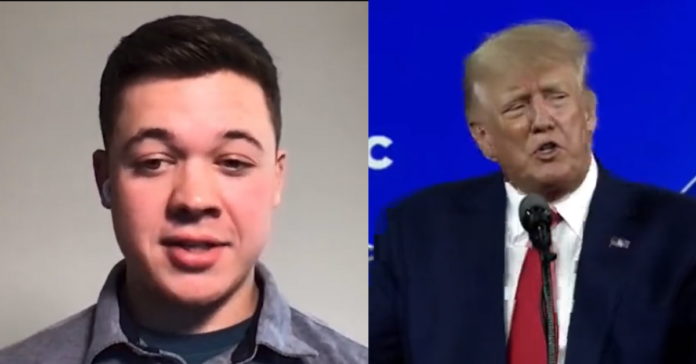 Kyle Rittenhouse broke his silence on meeting with former President Donald Trump at his Florida club, Mar a Lago. Kyle said meeting Trump was “phenomenal” and the former commander in chief gave him some very good advice on how to deal with the critics and other phonies.

Kyle said of Trump: “He told me that he understands what it feels like to have a lot of people not like you, and then just stay truthful to yourself and be yourself. Who cares what other people think?”

Kyle Rittenhouse also said Biden is dodging him and challenged the president to sit down and meet with him. “I was attacked. I was attacked and had to defend myself.

“I’m not a white supremacist.

“I’m not a domestic terrorist.

“I’m not a murderer, and anybody who wants to sit down and have a conversation, I’m more than open.

“I reached out to Joe Biden several times. Crickets.

“So it just shows how much of a man he is to not sit down and talk.”

“A candidate for the US presidency put his thumb on the scales of justice for political points by falsely claiming a US citizen was a white supremacist without a shred of evidence to support his claim.

“Make no mistake, @POTUS weaponizing his false allegations into a campaign ad was an egregious violation of Kyle’s due process rights.

“No American, let alone a 17 year-old, should be used as political cannon fire before having their day in court.

“Thank God the justice system worked and Kyle was acquitted of all charges.

“@POTUS has refused to engage with the young man he lied about for his own political ambitions.

“Make no mistake, Biden and the people that excuse his behavior have normalized attacks on citizens’ due process rights in the name of political power.”

.@ThisIsKyleR opens up on the past year leading him closer to God and deepening his faith, while working through PTSD. He also discloses his plans for the future as a defense attorney! I’m so proud of this fine young man and his courage to walk by faith!https://t.co/sfLn99069G

That is the point @ThisIsKyleR was making.

A candidate for the US presidency put his thumb on the scales of justice for political points by falsely claiming a US citizen was a white supremacist without a shred of evidence to support his claim. https://t.co/qZCleBSjzW

Trump Impeachment Could Be Wiped Off The Records – Rep. Mullin Just Introduced An “Expunge” Resolution