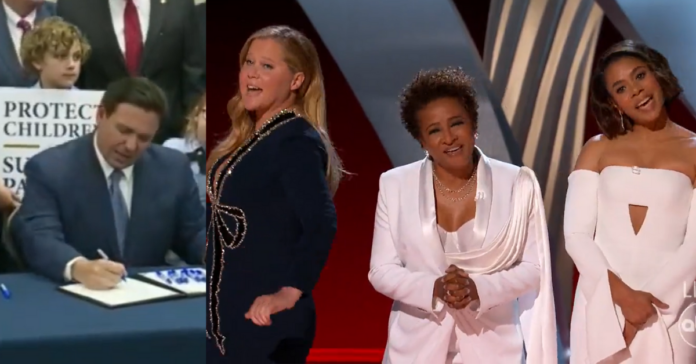 Florida Gov. Ron DeSantis overruled Hollywood and has signed the Parental Rights in Education bill. Critics have been thrashing DeSantis and last night Hollywood joined the pile on.

But as the bill bans classroom instruction on sexual orientation or gender identity in kindergarten through third grade and says any instruction on those topics cannot occur “in a manner that is not age-appropriate or developmentally appropriate for students in accordance with state standards,” even 52% of Dems agree with the bill according to a recent poll.

“We will make sure that parents can send their kids to school to get an education, not an indoctrination,” DeSantis said before signing the bill today. “I think the last couple years have really revealed to parents that they are being ignored increasingly across our country when it comes to their kids education.”

Last night at the Oscars, Hollywood went after Ron over the bill.

The Academy Awards wasted little time getting political on Sunday as co-host Wanda Sykes slammed Florida’s Parental Rights in Education bill, announcing on live television that “we’re going to have a gay night.”

During her opening set with fellow hosts Amy Schumer and Regina Hall, Wanda Sykes referred to the Florida legislation that would ban the teaching of sexuality and transgender ideology to children in kindergarten through third grade.

The audience at the Dolby Theatre in Hollywood erupted in loud cheers following Sykes’ remarks.

The bill bans lessons on sexual orientation or gender identity in some grades. https://t.co/nxzY5yD5cg pic.twitter.com/Y4FLsasT4G

After Sending Billions To Ukraine, Biden Seeks To Raise Taxes On The Rich