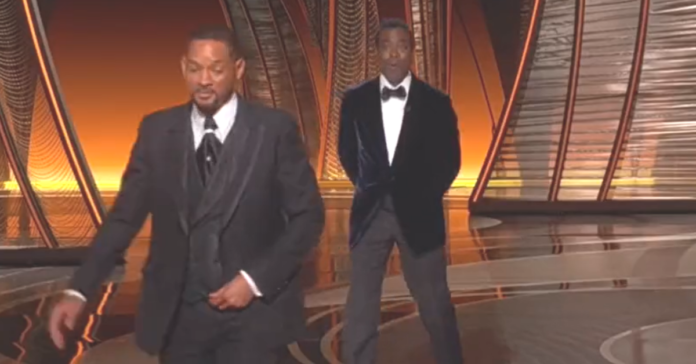 The Academy held an emergency meeting over Zoom today to discuss stripping Will Smith of his Best Actor Oscar after he slapped comedian Chris Rock across the face for making a joke about his wife Jada Pinkett-Smith.

The Daily Mail is reporting that “Oscar bosses are said to be split over whether to take the actor’s trophy for his role in ‘King Richard’ because the assault breaks a new code of conduct drawn up by The Academy in the wake of #MeToo movement and the appalling crimes of Harvey Weinstein.

“Members, including Smith himself, have agreed to behave in a way that never violates ‘the integrity of the Academy by their actions’ or face suspension or expulsion. Critics are clear that the actor’s live TV attack meets that definition – but his supporters insist he ‘should be able to hold on to it.’”

Whoopi Goldberg said: “I think he overreacted. I would’ve been a little annoyed. I think he had one of those moments where it was just like, ‘G-D it. Just stop.’ And you’ve got all the pressure of hoping that you’re going to win and trying to keep your face.

“I get it. Not everybody acts the way we would like them to under pressure. Some people just snap. He snapped.

“What I do want to say was that it was remarkable, wonderful, that Chris Rock did not take it to that other place it could’ve gone.

“I don’t know if they spoke or apologized or not. All I know is sometimes you get to a point where you behave badly. I myself have behaved badly on occasion.”

Goldberg, who is on the board of governors of the Academy of Motion Picture Arts and Sciences and who was re-elected in 2020 to the academy’s Actors branch, squashed talk of taking away Smith’s award.

“We’re not going to take that Oscar from him,” she said.

She added: “We’re not going to take it.

“Well, there will be consequences, I’m sure.

“But I don’t think that that’s what they’ll be.

“Particularly because Chris said, ‘Listen, I’m not pressing any charges.’”

One highly placed Hollywood source told The Post after the incident: “It’s basically assault. Everyone was just so shocked in the room, it was so uncomfortable.”

“I think Will would not want to give his Oscar back, but who knows what will happen now,” the insider said.

Meanwhile, the Academy cryptically announced from its official Twitter account: “The Academy does not condone violence of any form. Tonight we are delighted to celebrate our 94th Academy Awards winners, who deserve this moment of recognition from their peers and movie lovers around the world.”

VIA JAPANESE TELEVISION: The uncensored exchange between Will Smith and Chris Rock pic.twitter.com/j0Z184ZyXa

Should The Academy allow Will Smith to keep his Oscar?#TheView #Oscars pic.twitter.com/e8sriRrh4g