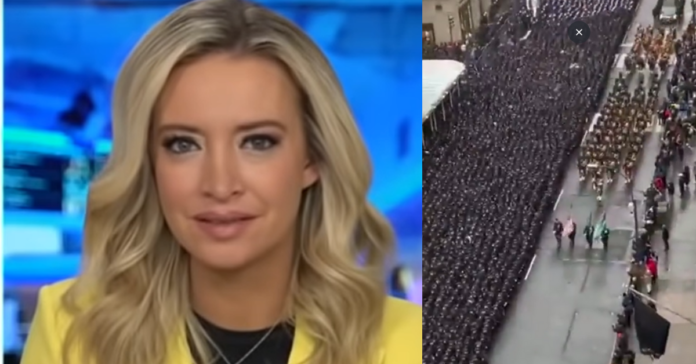 Former White House press secretary Kayleigh McEnany has had enough with the insane liberal policies that are destroying our cities after watching the funeral of NYPD officer Jason Rivera.

McEnany denounced the failed liberal policies that seem to favor criminals over law-abiding citizens because while those policies are bad politics, they lead to catastrophic results in the real world. “Let’s be real, there is a war on cops in this country. A war. And I’m not saying that lightly, I’m saying that with facts to back it up,” McEnany said.

Outnumbered co-host Emily Compagno started the discussion by saying: “Just last year alone, there was a 60% spike in officers that were killed in the line of duty from felonious activity.

“Generally speaking, the categories were sort of even in how these officers were killed, but there was one category that spiked 300% Kayleigh, and that’s ambushes, both unprovoked and premeditated and that’s how Jason Rivera died along with his partner Wilbert Mora.”

You can try to abolish them, but you’ll lose every time.

McEnany said: “Newlyweds. They met in elementary school. They had to be separated by a teacher because they were so distracted just being around one another.

“This was the love of her life, and he’s gone forever.

“He is a hero. He is the best among us and unfortunately, this is happening far too often.

“Let’s be real, there is a war on cops in this country. A war.

The widow of slain NYPD officer Jason Rivera ripped Manhattan District Attorney Alvin Bragg in her husband’s eulogy at his funeral Friday morning, as she described the gut-wrenching moment she found out he’d been killed.

“Although you won’t be here anymore, I want you to live through me. This system continues to fail us. We are not safe anymore, not even the members of the service. I know you were tired of these laws, especially the ones from the new DA. I hope he’s watching you speak through me right now,” Dominique Luzuriaga told mourners at St. Patrick’s Cathedral as they gave her a standing ovation.

“I’m sure all of our blue family is tired too. But I promise, we promise, that your death won’t be in vain.”

As Luzuriaga delivered the emotionally charged remarks, Bragg was in the audience listening, law enforcement sources said. He also attended Rivera’s wake Thursday night but his family walked into the back so they didn’t have to sit with him and later in the evening, someone told the embattled DA that the family wouldn’t be coming out until he left.