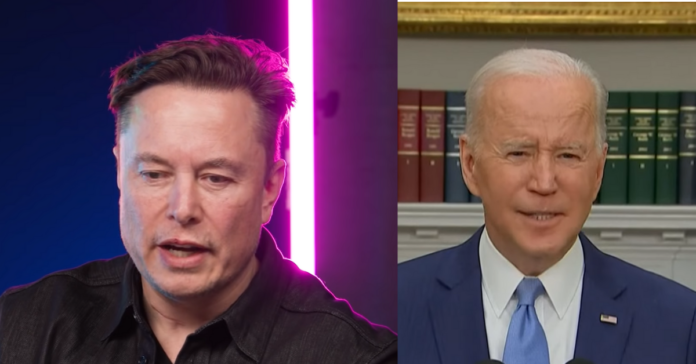 Tesla CEO and the smartest man in the world, Elon Musk, called out President Joe Biden for his many blunders calling Biden “a damp sock puppet in human form” on social media.

Musk also issued a warning to the American people that “Biden is treating the American public like fools.” Biden and his team of morons seemed to fire back at Musk on social media by snubbing Tesla at a big White House meeting to promote electronic vehicles. Tesla is the clear leader in the field so many were wondering how team Biden could be so petty.

“I meant it when I said the future was going to be made right here in America,” Biden wrote on Twitter. “Companies like GM and Ford are building more electric vehicles here at home than ever before.”

Musk who makes Tesla vehicles in California and has the company headquartered in Austin, Texas, called out Biden for the snub, saying “Starts with a T, Ends with an A, ESL in the middle. Biden is a wet sock puppet in human form.”

Biden is a damp 🧦 puppet in human form

Biden was ripped for the petty snub by many and a petition was started to get him to stop being so childish. The petition says:

“This is a petition for President Biden, asking him to acknowledge Tesla’s leadership in regards to electric vehicles.

The White House and the Biden Administration have intentionally been trying to ignore Tesla’s hard work while propping up GM and others as ‘EV Leaders.” They have snubbed Tesla on behalf of UAW citing that the EV events were for UAW.

In a recent interview with CNBC, Brian Deese, White House Director of the National Economic Council refused to answer the question as to why the Biden administration refuses to invite Tesla or even acknowledge Tesla’s role as a leader in this industry.

When asked why Elon Musk wasn’t invited to this week’s White House Meeting with CEOs about Build Back Better, Deese replied

“This was a great meeting, we had CEOs from sectors across the economy, not just the automotive sector but the technology sector, the industrial and healthcare sector. all across and what was really interesting of the perspectives the CEO were bringing was that all of them were underscoring things like investing in child care or education–early education. are core economic issues right now given our need to get people back into the workforce,”

That wasn’t the full reply but as you can see, not only did he not answer the question as to why the White House is refusing to invite Tesla to these EV meetings, but it shows that President Biden is intentionally ignoring Tesla’s hard work.

This is an insult to the Americans who work for Tesla. In addition, Biden’s insistance that GM is leading while completely ignoring Tesla is pure manipulation and he needs to stop.

The purpose of this petition isn’t to attack President Biden personally, but to let him know that we are not falling for the manipulation. We know Tesla is the leader and if you are manipulating Americans about who makes the most EVs, then what else are you trying to convince Americans of?

This is petty, honestly. And embarrassing.

I implore you, President Biden, and so do those signing this, to do the right thing and acknowledge Tesla for its hard work in making EVs a possibility for Americans,” the petition said.

Lou Dobbs Issues Biden 4 Demands, and Joe Could Easily Complete All of Them in Just a Few Minutes