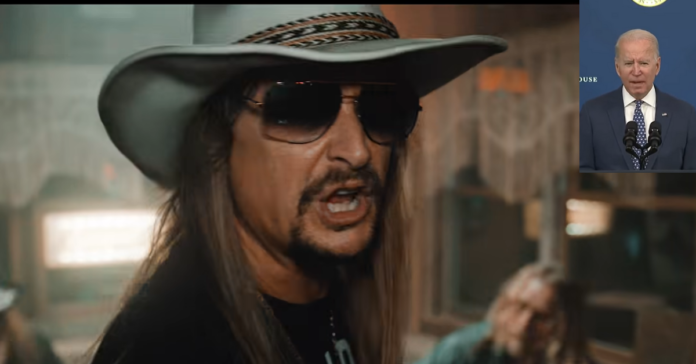 “Wear your mask, take your pills, now a whole generation is mentally ill,” the song lyrics read. “Every human being doesn’t have to agree, we all bleed red, brother listen to me. It’s time for love and unity. We the people have got to unite,” the song says.

At one point Kid Rock blasts the media for embracing Joe Biden’s policies but for calling them racist when Trump did the same: “Joe Biden does the media embraces, Big Don does and they call him racist.”

Kid Rock says his upcoming tour may be his last big tour. He said: “I’m not trying to sell tickets, ‘oh this is the last tour, you better come out and see me,’ but it very well could be for the unforeseen future.

“At 51 years old, it’s not getting any easier to do jumps and carrying on on-stage. But I’m really keeping myself together, I’m getting prepared mentally, physically, working out every day, trying to eat healthy, all that ’cause I want to be just top notch.

“I want to be at my peak for this tour, because I really don’t know for the unforeseen future if we’ll do a big tour again.

“Will we play some select shows in the future in the years to come? Possibly, maybe bring back the crews, just do a few key things.

“But being in tip-top shape, still being in what I would call the tail end of my prime, I want to make this one big, and if it is the last one, I want to do it right.

“So this is a very special tour to me.

“I don’t mind taking a good punch, but I hit back and I hit hard.

“Eventually I’d really like to get back to trying to bring people together.

“We can believe differently, I think. It’s one of the things that’s made this country great.

“The powers that be want to divide us but united we stand, divided we fall,” he said.