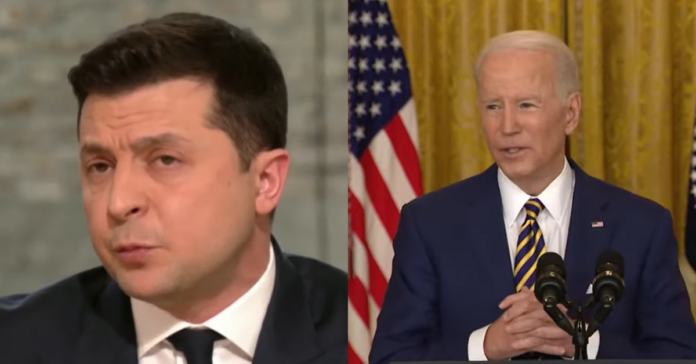 Ukraine is once again rebuking President Joe Biden in a stunning turn of events from a country literally depending on America for its survival. But Biden’s been making shaky moves so Ukraine felt they had to come out with the public clap back.

Ukraine first rebuked Biden after Joe seemed to give Vladimir Putin the greenlight to invade, this time they are rebuking him over his panicky response to a possible invasion after the US told the families of U.S. diplomats in Ukraine and U.S. citizens in the country to leave over the threat of imminent invasion by Russia.

A source close to Ukrainian President Volodymyr Zelensky told BuzzFeed News on Monday that Zelensky “does not think there’s any remotely imminent threat to Kyiv.” The source said: “The fact that the US was the first one to announce this is extremely disappointing and quite frankly these Americans are safer in Kyiv than they are in Los Angeles or any other crime-ridden city in the US.

“On the one hand, Washington tells Ukraine how we should democratize. We stand with you. It’s your right to determine to join the West.

“We will stand with you against Russian aggression. Then Russia turns up the temperature and they’re the first to leave.”

The source added Zelensky views Biden’s response as “utterly ridiculous” and a sign of “U.S. inconsistency.”

The State Department said in a statement:

“The security conditions, particularly along Ukraine’s borders, in Russia-occupied Crimea, and in Russia-controlled eastern Ukraine, are unpredictable and can deteriorate with little notice. Demonstrations, which have turned violent at times, regularly occur throughout Ukraine, including in Kyiv.

“While we respect right of foreign nations to ensure safety & security of their diplomatic missions, we believe such a step to be a premature one & an instance of excessive caution.

“There is a lot of misinformation, manipulation, and fakes in the Ukrainian and international media to spread panic among Ukrainians and foreigners, scare business, undermine the economic and financial stability of our country.

“It is important to soberly assess risks and remain calm,” he said.

Joe Biden 'No Longer Seen as Competent and Effective'