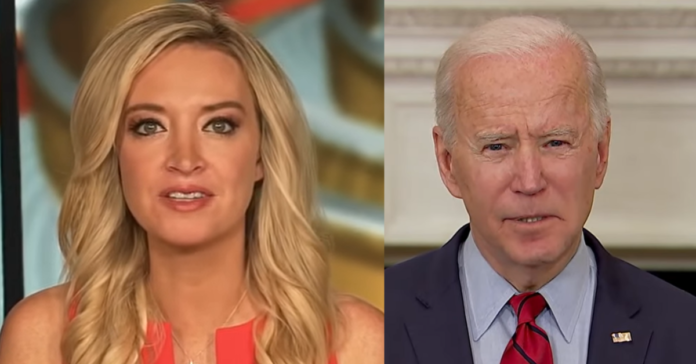 Guest co-host Brian Kilmeade started off by saying Biden was allowing division among NATO allies explaining that Germany was not allowing other nations to pass through their airspace if providing tactical aid to Ukraine. That and other moves were energizing Russian President Vladimir Putin. “It’s not helping the scene and is energizing Putin to see the division between NATO allies,” Kilmeade said.

Kayleigh said: “The Economist magazine points out that 100,000 troops might be the biggest buildup we’ve seen in Europe since the Cold War. I mean, this is where we are at. Very scary posture as we look at those troops on the border of Ukraine.

“Putin is a shark who tastes blood in the water, and he senses weakness in his foe. And his foe, make no doubt about it, is the United States.

“Yes, there are things we can do about it. President Trump put sanctions to the hilt on Russia, and you have the current Secretary of State saying, ‘Sanctions are a deterrent we’re not going to do them now.’

“You have Biden broadcasting, ‘I’m not unilaterally going to send troops.

“Who gives the playbook to the enemy? That is what our country is doing right now and it is a terrifying prospect that we have this guy for three more years.”

Biden seems lost and confused and thinks sending US troops to the region will do anything other than expose us to possible calamity. Biden cannot be serious about having an armed conflict with Russia so sending troops is just a signal. But putting a massive amount of troops in the region could lead to unintended consequences and misunderstandings that could destabilize the world.

The Biden administration is in the final stages of identifying specific military units it wants to send to Eastern Europe and writing up the military orders in an effort to deter Russia, which has massed tens of thousands of troops on the border with Ukraine, according to multiple US and defense officials.

No final decision has been made, but CNN reported that President Joe Biden discussed options for bolstering US troop levels in the Baltics and Eastern Europe with his top military officials during a briefing at Camp David on Saturday, according to a senior official.

The potential troop deployments come amid US warnings that a potential Russian invasion of Ukraine could be imminent. The State Department on Sunday reduced staffing at the US embassy in Kyiv, Ukraine, with the departure of nonessential staff and family members out of “an abundance of caution.”

Biden will hold a secure video call with European leaders on Monday afternoon, which the White House said was part of the administration’s consultation and coordination with European allies in response to Russia’s military buildup.

Not content to make me pay more for gas and food on a regular basis, Biden’s economy is now wrecking my retirement investments. https://t.co/jhobCDMdkK

Senator Orrin Hatch Does It Again