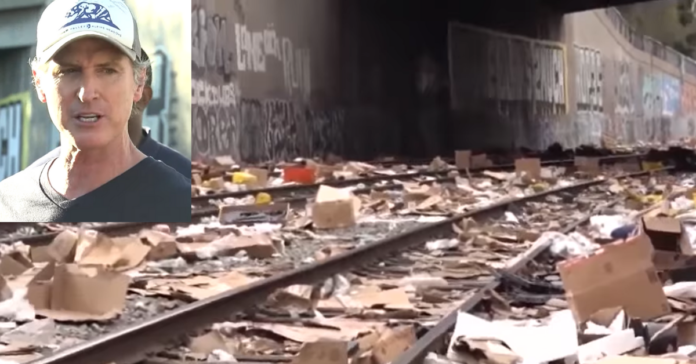 California Gov. Gavin Newsom came clean yesterday about the dismal state of Los Angeles as crime surges out of control. The latest disgrace in that fallen city is what is happening on railroad tracks.

Trains get backed up at a certain part of Los Angeles and the thieves have been out in force breaking into trains and leaving debris scattered over the tracks. The pictures went viral because most Americans thought that the scene was from India or another third-world country. They were shocked to discover the pictures were from the once glitzy city of Los Angeles.

Trump famously warned that the Democrats’ insane policies at the local level were leading to shocking increases in crime and homelessness that were making this great country resemble a third-world country.

Trump was mocked by the media and their friends in the Dem Party but they are not laughing anymore as one of their favorites, Gavin Newsom, just said the same.

“What has happened on this stretch of the Union Pacific Railroad is unacceptable,” Newsom said before adding the scene looked like one from “a Third World country.”

“How do we make sure we don’t have to keep coming back?. How do we secure this site?

“How do we do a better job in making sure that this doesn’t have to continue to happen?

“This is the supply chain.

“I know all of us are focused down on the water, it’s so damn beautiful, and everybody’s just focused on containers at the ports, the supply chain.

“Two-hundred-80 people have been arrested,” he said.

“But there should be more. They need to be held to account.

They clearly do and not just in Los Angeles. Any Dem city pushing these insane pro-criminal policies is seeing the same thing.

Rising crime and a lower standard of living all the while paying higher taxes because of rampant corruption. That is not a formula success, it is a formula to be the next bankrupt city like Detroit.

“It’s not deterring crime, it’s not preventing it.

[VIDEO] Trump Just Set the Record Straight On Him and DeSantis, Once and For All