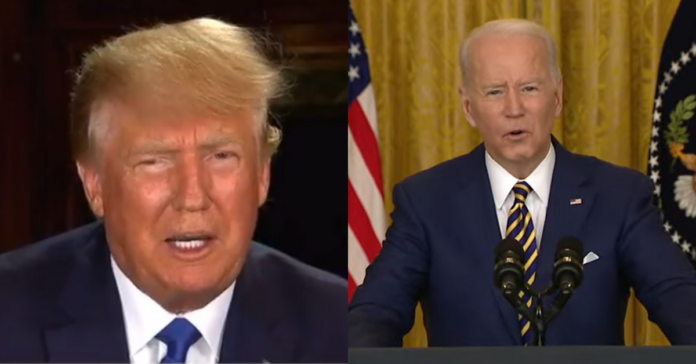 Former President Donald Trump gave his report on year one of Joe Biden’s great American debacle to Fox News and held nothing back saying: “I had no idea the country could go down so badly and so quickly.

Trump said he went to Los Angeles and “saw the massive containers, thousands and thousands of them where they dock the ships, in the loading and unloading areas and I will tell you, I’ve never seen anything like it.”

“As an example, I did a book and the book turned out to be a tremendous success, and we sold over 200,000 copies of the book which is much more because this is a picture book.

“We did things that nobody thought.

“Anwar, we got Anwar approved. Ronald Reagan tried to get it done, everybody did, nobody could get it done, we got it.

“Would have been perhaps the biggest drilling site, energy site in the world and it was terminated by Biden and Lisa Murkowski made it possible to have it terminated.

“You know, all of these things, we’ve done so much, and now I’m watching what’s happening to our country and our country is being absolutely destroyed. Destroyed.

“Our dignity, our strength, it is being sapped and destroyed.”

“It is hard to believe.

“China is dictating terms to us. Russia on Ukraine. China with Taiwan.

“Kim Jong Un as you know of North Korea is sending up missile after missile and very importantly, Iran is having a lot of fun doing whatever they want.

“And our country looks like it is just weak and incompetently run.

“I never thought I’d see our country look so weak and ineffective.”

“I think you’re going to see a lot of people are going to be very happy, because, if you look at the polls, you know what they’re saying,” Trump said on running again. “And they’ve never been stronger. I’ve never had polls so strong.”